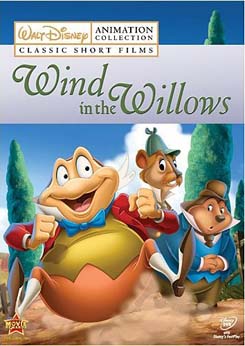 Video Event of the Week: Is it MGM's Blu-ray update of The Good, the Bad and the Ugly, Sergio Leone's classic spaghetti western with Clint Eastwood? Might the new Criterion DVD of Wise Blood, the amazing John Huston film with Brad Dourif (from the Flannery O'Connor story) possibly get the nod? Or against everything that is good and holy, could Fox's Blu-ray of Taken -- the repellent revenge flick in which Abbey Theater alumus Liam Neeson plays a Jack Bauer wannabe who gets to put electrodes on a bad guy's testicles -- possibly be The One?

All worthy, to be sure, except for that last one, obviously, but for my money at least it's got to be volumes 5 and 6 from Disney's new Classic Short Films Animation Collection, specifically the two utterly charming adaptations of stories by Brit kids writer Kenneth Grahame -- Wind in the Willows and The Reluctant Dragon.

Wind in the Willows was originally one part of Disney's Ichabod and Mr. Toad (1949) (the other part being a spectacular version of The Legend of Sleepy Hollow that's the definitive screen treatment of the story before Tim Burton and Johnny Depp). Faithful to the spirit if not the letter of Grahame's original, it features a plummy voice-over narration by Basil Rathbone, some marvelously inventive animation, cute character driven songs, and in Mr. Toad -- voiced by off-kilter Brit character actor Eric Blore (Joel McCrea's valet in Sullivan's Travels) -- it boasts one of the screen's most hilarious comic obsessives.

Here's a clip to give you a little taste of both the songs and Blore's eye-rollingly manic Toad..

The Reluctant Dragon is from an earlier (1941) Disney anthology film that was one of the master's few commercial failures back in the day; audiences didn't really care for the backstage look at the studio that formed the bulk of the picture, but in any case the big blue dragon himself is a sui generis comic creation. A reptile who'd rather recite poetry than threaten fair maidens, he is, essentially, an over the top (very) occasionally fire-breathing version of Quentin Crisp, and his fake death scene is one of the funniest moments in any classic Disney animation.

Incidentally, Dragon was produced at the height of a fairly contentious strike by the Disney animators (Walt Kelly, of later Pogo comic strip fame, was one of them) -- 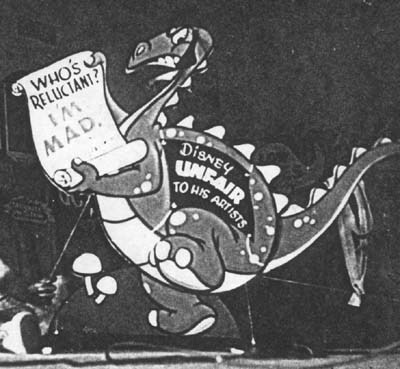 -- but you'd never know it from the finished product.

Dragon, like the other volumes in the set -- The Three Little Pigs (including the Oscar-winning 1934 short of the same name), The Tortoise and the Hare, Mickey and the Beanstalk, and Mickey in The Prince and the Pauper -- is fleshed out with other lesser known Disney shorts (my favorite is Ferdinand the Bull, whose titular hero prefers to smell the flowers rather than hoist a matador on his horns), and they all have their moments. WITW, like the rest, has been afforded a first-rate transfer, although none of them have received digital makeovers like the recent Pinocchio, which means there's some scratching and some obviously faded Technicolor on display at times, depending on the age of the originals.

That said, in these economically straitened times, I'd venture that only volumes 5 and 6 are absolutely essential; you can -- and probably should -- order Willows here and Dragon here. 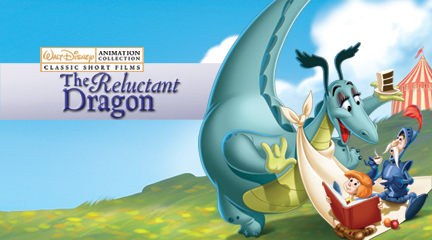 Best or Worst Kids Flick -- Either For or About!!!

Four kids and a dead body in the woods. A quest movie, obviously, set against the nostalgic backdrop of Eisenhower Era America, with a great cast including the young Kiefer Sutherland and River Phoenix. Too bad Wil Wheaton wasn't the dead body, of course. (Sorry -- a sop to Trekkies.)

A Depression era gangster movie with songs by Paul Williams and an all-kid cast, including Jodie Foster and Scott Baio. Awful beyond belief; it's like The Terror of Tiny Town except without the charm and with kids instead of midgets.

One of the all-time best Hollywood adaptations of a classic book, with a terrific Errol Flynn and a glorious score by Erich Wolfgang Korngold. (The title music, heard in the credits above, furnished the main theme for the composer's Violin Concerto. Thought you'd like to know.)

And the most kiddified kid flick, it's not even really a contest so don't bug me or I'll give you a wedgie, obviously is --

Charmingly sick sort of horror flick with the then 13 year old Jodie Foster (see number 4, above) as the titular little girl with the deep dark secret. With Martin Sheen as a creepy pedophile and Mort Shuman, composer of Viva Las Vegas and other rock classics, as a small town cop.