Brevity is the Soul of Wit. Also, Penis Jokes. 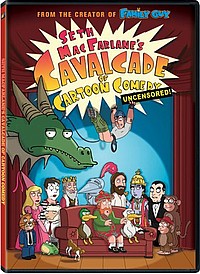 Okay, I admit it -- I belong to that small subspecies of humanity that thinks that comic auteur Seth MacFarlane's Family Guy is, pound for pound, the funniest TV show ever. So it won't come as a surprise to learn that a new DVD of bits that for whatever reason didn't make it onto the series strikes me as the most consistently laugh out loud thing I've seen since...The Simpsons Movie.

Hmm. Seems to be a theme here.

Anyway, Seth MacFarlane's Cavalcade of Cartoon Comedy (Fox Home Video) is an hour long anthology of what are, essentially, blackout sketches (fifty in all), and like the show from which they (may or may not) derive, they're alternately scabrous, snarky, or absurdist about (mostly) contemporary pop culture, although there are bigger subjects addressed. My personal favorites include "Two Ducks Watching Meet the Parents", which is the most trenchant piece of movie criticism in years, and "Why Bob Marley Should Not Have Acted as His Own Attorney," although the bits about Tara Reid's talking stomach and the pervert sheep begging to be sheared are fairly transcendent as well.

In any case, here's a representative sample -- "Beavers: Assholes of the Forest!" --and apologies for the swear words.

You can -- and absolutely should -- order it here. Seriously -- if parts of this don't make you fall off your couch laughing, you really need to have it looked at.