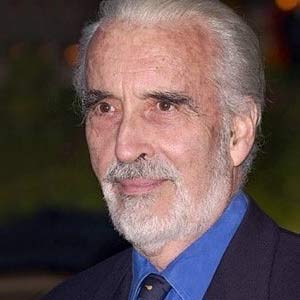 I don't know how I missed the memo on this, but few things have given me more pleasure so far this year than suddenly learning -- today, for heaven's sake -- that hero of my youth Christopher Lee was knighted by Queen Elizabeth on June 12th.

Hey -- that's SIR Christopher Lee to you folks from now on, okay?

Lee, of course, as is his wont, has been too busy to pay much attention to the honor; while awaiting the release of Tim Burton's Alice in Wonderland adaptation, featuring his turn as the Jabberwock (alongside Johnny Depp as the Mad Hatter), Lee is currently hard at work in New Mexico on the forthcoming thriller The Resident with Hillary Swank, which by some counts will be his 221st(!) film.

Anyway, while savoring the news of his knighthood, I started trying to come up with my fave Lee moments, a duanting task given the length and breadth of his career. And while his titular role in the justifiably parodied on MST3K Castle of Fu Manchu sprang immediately to mind, a few examples on a slightly higher esthetic level finally penetrated. (Three of them share a sort of common theme, as you'll see, and no, they're not really horror flicks, for all that Lee was typed as a screen scream icon). 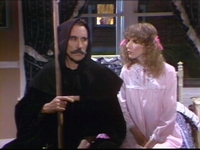 The funniest, of course, was his 1978 guest apperance on Saturday Night Live and in particular the wonderful skit where he played Mr. Death, the Grim Reaper himself, coming to give the bad news to a little girl played by Larraine Newman. Newman was interviewed by Tom Snyder a few years later, and she told him that the SNL cast -- and especially the women (i.e., Jane Curtin and Gilda Radner) -- absolutely adored him, and that he had in fact been their all-time favorite guest host. I knew the feeling, actually. 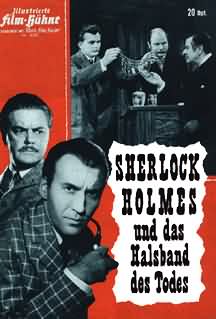 Then, of course, there was Lee's starring role as the World's First Consulting Detective in the Anglo-German-Franco-Italian coproduction Sherlock Holmes and the Deadly Necklace (1962), an unintentionally surreal outing in which Holmes and Dr. Watson go up against arch-villain Dr. Moriarity (Hans Söhnker), who's plotting to steal some of Cleopatra's jewels, in a peculiar sort of period piece where you can't really tell what the period is; the art direction looks vaguely like the 1930s, but the story seems to take place in the Victorian era.

"It was made in Spandau, with some location shots in Ireland, and it seemed fortune was smiling on our plans. Terence Fisher was over to direct, and a brilliant replica of 221B Baker Street was made on a German stage with everything so much in its place that Holmes' redoubtable housekeeper wouldn't have been able to fault it. Thorley Walters made an excellent Watson, and for Holmes there was me. I looked like him. And I was naturally brusque. We were backed by many eminent German actors. And the sum of it all was a mess.

In any case, Lee looks smashing as the Baker Street sleuth, and the film has genuine atmosphere to burn, but as with a number of his films of the era (say, an equally interesting sword and sandal epic like Mario Bava's great Hercules in the Haunted World) Lee's voice is dubbed by an actor whose identity has been lost in the mists of time. Like I said, unintentionally surreal, which is its charm.

Lee, of course, had been in an earlier, far superior Holmes movie in 1958, to wit, Hammer's adaptation of the often-filmed The Hound of the Baskervilles. The first Homes flick in color, the Hammer Baskervilles stars Lee as the scion of the possibly cursed Baskerville clan; the Holmes is his long-time real life friend and frequent co-star Peter Cushing, who's terrific. It's not the most faithful of all the adaptations to Conan-Doyle's source novel, and it's fairly studio-bound, but overall it has a certain something none of the other film versions has; it simply works, both as a Holmes-ian detective thriller and a Gothic spook piece. 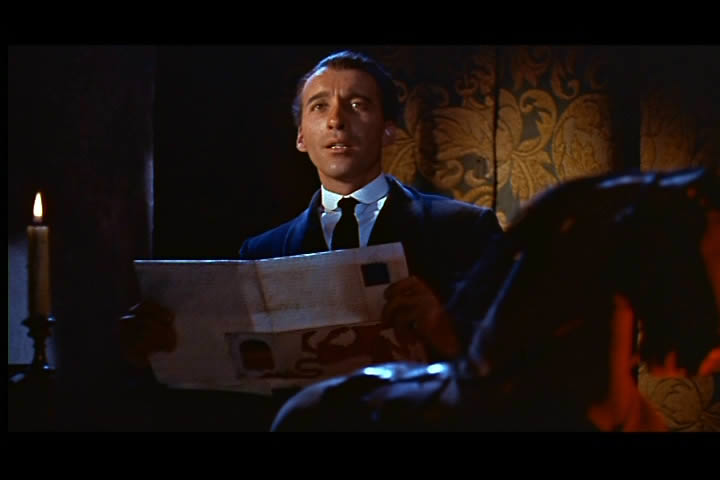 And then, of course, there's the genuine masterpiece -- Billy Wilder's revisionist 1970 The Private Life of Sherlock Holmes, this time with Lee as Sherlock's less ecentric but equally brilliant brother Mycroft.

That's Robert Stephens in the clip as Sherlock; the excellent Colin Blakely is Watson. As you can see, Wilder is out to subvert the canon ever so slightly -- his Holmes is supposed to be a more complex, morally ambiguous character than the one in Watson's (and Doyle's) accounts -- and while pretty much everybody now agrees that he succeeded, the film was a flop in its day, and there are significant chunks cut by the studio that are apparently lost forever. In any case, Lee is great in a pivotal role and if you haven't seen it, pounce.

You can order the Necklace here; Private Life, with as much of the lost footage as could be found restored, is available here. And the Hammer Baskervilles, in a gorgeous transfer with a nice bonus interview with Lee, can -- and definitely should -- be ordered here.