I'm sure you recognize the image below -- 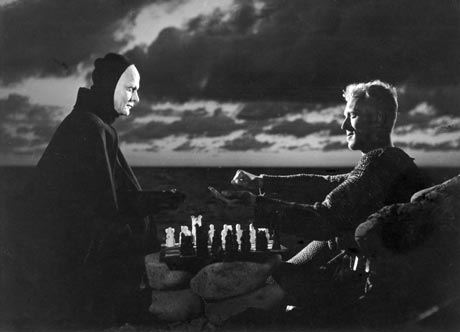 -- which is of course Max Von Sydow playing chess with the Grim Reaper in Ingmar Bergman's The Seventh Seal.

It is, of course, one of the most iconic and instantly recognizable scenes in all of cinema, and I bring it up because the film itself, in a splendid new transfer, has just been released on Blu-ray (with the usual admirable extras, including a tribute from Woody Allen) by the fine folks at the Criterion Collection. For which I can only say, kudos and huzzahs, Criterion Collection. And there's no question in my mind that you should -- immediately -- order it here.

Nevertheless, I'm one of those philistines who thinks you would need a heart of stone not to laugh at the film's pretensions, which for me were best skewered back in the early 70s in the old (funny) National Lampoon. Specifically, in a fake ad for a self-help book entitled Bobby Fischer Teaches You to Cheat Death! in which they replaced Von Sydow's head with that of the late chess superstar, grinning maniacally.

Alas, like most of the stuff from the Lampoon's glory days, that ad is nowhere to be found on the intertubes, so let me propose a contest.

To wit: The first reader who can reproduce the fake photo -- hey, I have no photoshop skills, but somebody out there must -- will win a brand new, unopened DVD of Isla Fisher (see, it's a theme!) in the delightful 80s Yuppie fantasy washed up on the shores of the 21st century Confessions of a Shopaholic.

And of course, the image will be published here.