Well, yesterday morning I was immersed, as is my custom, in the great comforting warm bath that is the New York Times' Arts & Leisure section, when the following item not only caught my eye, but warmed the cockles of my heart.

If this doesn't finally settle the question of whether Anvil is a real band, nothing will: that hard-rocking Canadian group, whose career is chronicled in the documentary Anvil! The Story of Anvil, will open for the heavy-metal band AC/DC at Gillette Stadium in Foxborough, Mass., on July 28, and at Giants Stadium in East Rutherford, N.J., on July 31, the bands' publicists said in a statement. Anvil, founded in Toronto in the 1970s, enjoyed a short-lived American success in the 1980s with albums like Hard 'N' Heavy and Strength of Steel. The group recently re-entered the cultural consciousness with the Anvil! documentary, directed by the screenwriter Sacha Gervasi, though the movie has also prompted the occasional (mistaken) conclusion from viewers that the band is an elaborate, Spinal Tap-style hoax. Anvil! The Story of Anvil is scheduled for a DVD release this fall.

Seriously, this is news that absolutely makes my day. And if you haven't seen Anvil!, which is probably still in a theater near you, run do not walk; not only is this the best movie about rock-and-roll in ages, it's also touching, funny and, well, a genuinely life affirming story about following your dreams no matter what. Trust me, you will absolutely fall in love with the two nice fifty-something Jewish boys who are the heart of it, even if you couldn't give a rat's ass about heavy metal. 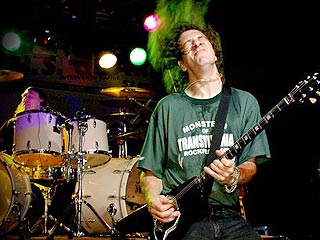 Here's the trailer to give you a little idea what we're talking about.

Incidentally, I would be remiss at this point if I didn't mention that the film occasioned possibly the most hateful review I've ever read of anything, by right-wing crackpot Debbie Schlussel -- a wretched, obviously emotionally stunted woman totally lacking in anything resembling empathy for another human being. I should also mention that Satan himself (who has a special interest in the Anvil guys) just e-mailed me to say that on the basis of said review, he's got a special circle in Hell reserved for La Schlussel. Although in her case, he informs me, it'll be more like a reunion with Dad, if you know what I mean.