Pirates of the Caribbean: The Early Years 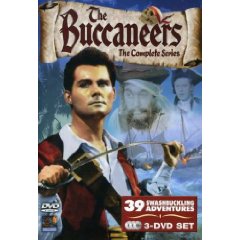 The Taking of Pelham 123 -- Overamped remake of the definitve 70s NYC time capsule, with Denzel Washington and John Travolta devouring large swaths of scenery in generally entertaining fashion. Despite what the film suggests, however, the number 6 train does NOT go to Coney Island.

In any case, The Buccaneers -- which ran on CBS on Saturday nights in the 1956-57 TV season, was an absolutely unforgettable kid-friendly but suitable (thanks to sharp writing) for adults precursor to the Johnny Depp pirate flicks that have so enthralled our noble republic in the last few years. The aforementioned Shaw -- easily the coolest Brit any of us 50s youngsters had seen before the arrival of Patrick McGoohan in Secret Agent -- played swashbuckling Captain Dan Tempest, a former pirate pardoned by the King and now working for the Crown as a privateer. His foil -- and the show's secret weapon -- is Lt. Beamish, the straight arrow but sardonic Crown-appointed deputy governor who doesn't agree with Tempest's way of doing things, and who is played, brilliantly, by Peter Hammond; in fact, the snarky back and forth between the two of them remains one of the major pleasures of TV's Golden Age.

That's Shaw on the left, below, obviously. Hammond's in the middle, seated. Not sure who the woman with her back to the camera is, but I'd like to think it's Paul McCartney's 60s girlfriend Jane Asher, who did in fact guest star in episode 32. 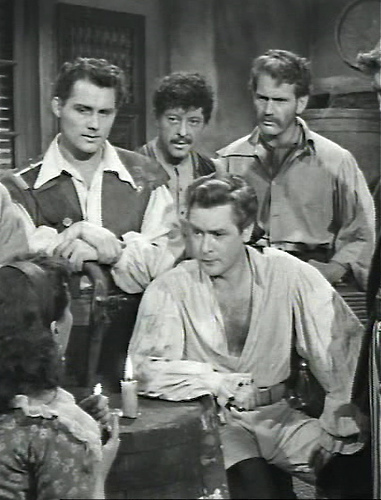 In any case, Mill Creek's box set of the complete series -- 39 half-hour episodes on three discs -- features transfers in almost pristine shape, and I am frankly beside myself that it's been available since 2006 without anybody telling me. I should also add that episode 16 -- an atypical supernatural (or is it?) Flying Dutchman-esque mystery called Ghost Ship, remains the spookiest thing I've ever seen on TV, and that sitting through these adventures for the first time in nearly half a century has been the most fun I've had with my clothes on this month.

Here's a complete actual episode to give you an idea of the flavor of the show; alas, it's from late in the series, and Hammond's Beamish character had inexplicably departed. Shaw's still cool, though, and the writing remains sharp, so enjoy!