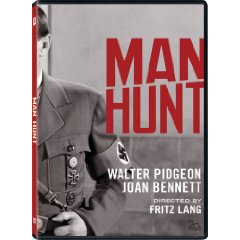 Well, in the case of two fascinating films that have just made their DVD debuts, they actually saved the the rest of Hitler from some people who wanted to do him in. I refer, of course, to the big game hunter played by Walter Pidgeon in Fritz Lang's riveting 1941 thriller Man Hunt (from Fox Home Video), and to the Nazi officer played by Tom Cruise in last year's underrated and stylish Valkyrie (MGM/UA) from Usual Suspects auteur Bryan Singer.

Man Hunt (which has been totally restored for DVD and looks almost astonishingly pristine) is perhaps the more audacious of the two for any number of reasons (not the least of which is that it was made by a man who had to get out of Dodge, Nazi Germany-wise). Based on the best seller Rogue Male by Geoffrey Household, it features Pidgeon as the aforementioned hunter who sneaks onto the grounds at Berchtesgaden and gets Hitler in his rifle sights; before he can escape, however, he falls into the hands of the Fuhrer's chief of security (the wonderfully sinister George Sanders) who remains unconvinced that the whole thing was just a prank of sorts. There's lots more, including scenes of Pidgeon being tortured for a confession (surprisingly relevant to our contemporary politics, obviously), a Cockney hooker with a heart of gold (nicely played by the usually wooden Joan Bennett) and a stunning chase scene featuring an empty (and surpassingly spooky) London subway station and John Carradine as an assassin with a sword cane. And throughout, Lang invests the entire film with a miasma of paranoia and claustrophobia that's intense even by his own standards.

In short, great stuff and not to be missed; the new DVD features a nice making-of doc, the original trailer, a seviceable commentary by Lang scholar Patrick McGilligan, and a frame to frame restoration comparison, which is instructive. 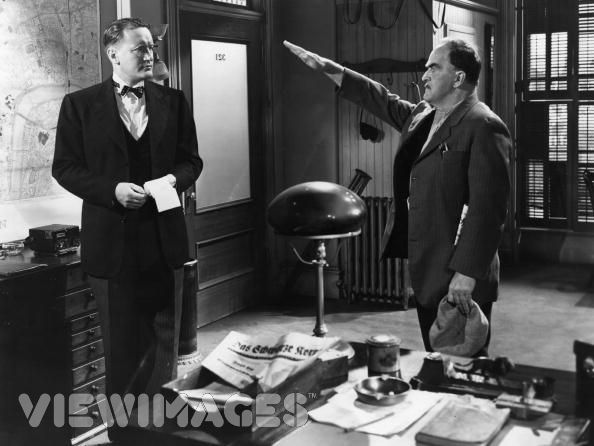 The Singer film is more problematic, starting with the casting of Cruise as the real life Wehrmacht Colonel who leads the plot to assassinate Hitler; I, for one, found it hard at times to imagine the kid who lip synched the Bob Seger song in his skivvies as a Nazi with moral qualms. It also suffers a bit from Spot the Cameo syndrome (Oh look -- there's Terence Stamp! Hey, over there -- it's Bill Nighy!), which has been a problem with World War II epics since The Longest Day in 1962; it's disconcerting, for example, to have the General in charge of Hitler's communications array played by an out of drag Eddie Izzard.

That said, Singer's telling of the story generates a rather surprising level of suspense given that you know how it's going to turn out, and the 40s detail is smashingly rendered; at the very least, this is one of the handsomest historical period pieces in recent memory. The DVD version is mostly bonus free, but it comes with a running commentary by Singer and Cruise that's actually a rather interesting cautionary tale about the perils of trying to make art by committee.

Here's a trailer to give you a little taste.