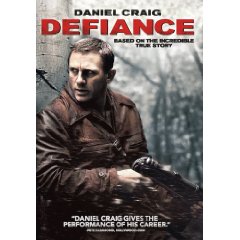 Video Event of the Week: Is it Zeitgeist Films' Philippe Garel x 2, a double DVD set of semi-autographical features by the underrated French auteur? Might MGM's Blu-ray update of William Friedkin's To Live and Die in L.A., starring C.S.I.'s William Petersen and the late great King of the B-Action Movie Steve James, possibly make the cut? Or against all rhyme and reason, could Paramount's DVD of Revolutionary Road, in which director Sam Mendes informs us that bourgeois middle class life in the 50s was even more stultifying than in his set-in-the-presentRevolutionary Road due to fatty foods, conceivably be The One?

All worthy, to be sure, but for my money, it's got to be Defiance, Paramount's terrific DVD of Glory director Edward Zwick's unexpectedly stirring true tale of Jewish resistance against the Nazis in Belarus, starring Daniel Craig and Liev Schrieber. The story itself -- about two brothers who not only organize a ragtag opposition to the German oppressors but manage to survive the war along with nearly a thousand others who hid out in the forests when not actively blowing the Nazis up -- is so astounding it's kind of amazing it's also so little known, but Zwick doesn't hit you over the head with the revisionist nature of it. Actually, in a lot of ways this is very old fashioned, even square, movie-making, but to his credit, Zwick also avoids hagiography; the story as it unfolds remains focused and resolutely human. Yes,the battle scenes are harrowing, yes, the Nazis are the embodiment of evil, and yes, the Jewish partisans are incredibly heroic, but they aren't sentimentalized either -- there are schlemiels and outright schmucks amongst them, which is to say this feels like a window on some real people's real lives.

Here's a trailer which gives you a pretty good idea of the film's deft blend of realism and uplift.

Paramount's DVD version features a spectacularly detailed transfer, and the bonuses -- including a very interesting making-of documentary and a running commentary by Zwick -- are above average. The best, however, is Children of the Otriad, a rather shattering documentary on the descendants of the real life characters played (brilliantly, I might add) by Craig and Schrieber. Here's a clip featuring two sons, a daughter, and a grandaughter.

Okay, at this point I would normally lay out a Listomania theme based on the movie I just discussed, but allow me, if you will, a slight digression about a film and DVD I mentioned in passing last week, to wit Warner Home Video's new restored version of Zabriskie Point, Michelangelo Antonioni's 1970 meditation on all things American countercultural. The reason I bring it up is that I hadn't seen the thing since it was first released theatrically, and I was wondering if it was better, or at least more coherent, than I remembered. Well, turns out, no, it's still ludicrous stoned revolutionary mishegass and, yes, you can still fit what Antonioni knew about what America felt like at the ass end of the 60s into a thimble. Plus it wastes the great Rod Taylor, which is for me an unforgiveable sin.

To be fair, however, it does have a cool soundtrack (Stones, Pink Floyd, et al), and for what it's worth, Antonioni's widescreen compositions look really impressive on the new disc. So you might want to order it anyway; just go here if you have a little disposable income.

Anyway, ZP is such nonsense that I began to think, hey, maybe this Antonioni guy was always full of it, but we just never noticed until he started making movies in English. And maybe there are other well-regarded auteurs of whom something similar could be said.

Worst Movie Ever Perpetrated By a Theoretically Important Director!!!

I've never been much of a Penn fan, and I've aroused some ire around here by suggesting that a sacred text like Bonnie and Clyde might be just a tad overrated, but I'm sorry -- if you profess to find a single redeeming feature to this one, there's no hope for you.

This may actually be the most avant-garde movie Spielberg ever made, in the sense that it's a two and a half hour comedy without a single laugh. I'm not sure if that's what Brecht had in mind when he was talking about the Alienation Effect, of course.

Victor Mature in a fez -- nuff said. Seriously, this one is so ridiculous it doesn't even rise(?) to the level of camp.

Okay, this is a little unfair; Donen -- the auteur of such classics as Singing in the Rain and Charade -- came on board the film after star Kirk Douglas fired the original director during the early stages of production. But it's still got his name on it, and boy is it cheesy. High points include a brief shot of co-star Farrah Fawcett's left nipple, a rape by robot, and Harvey Keitel's voice being dubbed by Brit Roy Dotrice.

And the all-time worst piece of crap ever helmed by a director taken seriously by theoretically sane people, it's really not even worth arguing about, is obviously....

I go hot and cold on Altman, and I've aroused some more ire around here by suggesting that Nashville is the most grotesquely overrated film in American cinema history, but there's no question that Altman made as many turkeys as he did great ones. This piece of sci-fi bushwa is a prime example; compared to Quintet, The Brain From Planet Arous is Tokyo Story. I should also note for the record that actually this isn't even the worst film Altman made in '79; that honor goes to the putative comedy A Perfect Couple, a painfully unfunny hippie love story that's about ten years past its shelf date, but I couldn't find the trailer on YouTube.