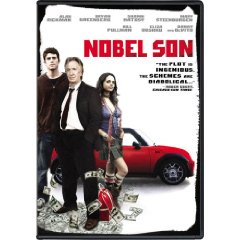 Video Event of the Week: Is it Warner Home Video's 40th anniversary director's cut of Woodstock, featuring eight gazillion hippies and an hour's worth of previously unseen performances (including a peak set by Creedence -- yay!)? Could Paramount's new Blu-ray version of Glenn Close boiling Michael Douglas' bunny in Fatal Attraction possibly make the cut? Or against all the odds, might Sony's DVD or Blu-ray of the five o'clock shadow that is Clive Owens in the mostly gripping thriller The International conceivably be The One?

All worthy, to be sure, and I'm definitely gonna write about the Woodstock set next week, but for my money, it's got to be Fox's DVD or Blu-ray versions of the delicious Alan Rickman bitch-fest Nobel Son.

Okay, I don't want to oversell this one; it's visually kind of annoying, in an over-amped quick-cutting Guy Ritchie kind of way, and it's largely devoid of likeable characters. That said, I thought it was a hoot from stem to stern. Essentially, it's a contemporary update of Ruggles of Red Gap/Ruthless People, with Rickman as a loathsome academic whose son is kidnapped, with the expectation of a huge ransom, after he wins the titular Nobel Prize. It's all very dark and very funny, and the cast is great, in particular Eliza Dushku, as a performance artist with issues (she has a partial nude scene, sports fans!) and Mary Steenburgen as the long suffering wife who is also the forensic psychiatrist who shot down Jeffrey Dahmer's insanity defense. Bill Pullman and Danny DeVito (hey -- weren't they in Ruthless People?) are also very funny as, respectively, the cop investigating the abduction and an obsessive compulsive neighbor. Fox's transfer is exceptionally sharp looking, and there are the usual bells and whistles extras, the best of which is a commentary track featuring director Randall Miller, co-star Bryan Greenberg (who plays the son) and a few others, all of whom sound suspiciously drunk.

Here's the trailer, for a little taste.

Okay, you can -- and probably should -- order it here.

But in the meantime, and since things are going to be relatively quiet around here until Monday, here's an obviously relevant little fun project for us all to contemplate --

A James Bond pastiche in which the supersecret criminal cabal that turns out to rule the world is revealed as...well, let's just say you get a monthly statement from them even now. One of the funniest and most politically savvy satires of the 60s, and Godfey Cambridge's monologue about the first time he came up against racial bigotry as a kid remains astoundingly powerful.

The book, of course, is the original black comedy in the contemporary sense, and it was supposedly unfilmmable. For my money Buck Henry's screenplay pretty much gets everything right, however, although I'm aware some people strongly disagree.

A wonderfully absurdist paranoid conspiracy thriller about presidential assassinations that basically sends up all of American history after WWII. From a novel by Richard Condon, and even more deliriously over the top than his more famous The Manchurian Candidate.

And the number one darkly humored flick quite self-evidently is ---

The monster movie as sly genre-tweaking farce, and light years ahead of its time. Ernest Thesiger, as the mad Dr. Pretorious, to Dr. Frankenstein: "We shall drink to our partnership. Do you like gin? It is my only weakness." Later in the film, to the monster: "Here, have a cigar... they're my only weakness."