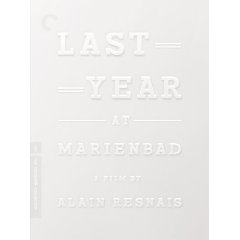 Video Event of the Week: Is it Sony's The Jack Lemmon Collection, a new boxed set including the underrated 1957 service comedy Operation Mad Ball, with genius co-star Ernie Kovacs? Could Disney's Blu-ray upgrades of the first two seasons of Lost possibly get the nod? Or against all rhyme or reason, could Lionsgate's DVD of Tyler Perry's Madea Goes to Jail, the latest installment in the inexplicable matriarchal drag series, concievably be The One?

All worthy, to be sure, but for my money, it's got to be the Criterion Collection's remarkable new two-disc director-approved version of Alain Resnais' 1961 New Wave surrealist puzzler Last Year at Marienbad.

I should stipulate up front that Marienbad is one of those sacred texts that I've never been as taken with as a lot of very serious people are. I thought it played, at least in part, like a parody of artsy High Modernism when I saw it in college in the mid-60s, and revisiting it this week I still felt so. Seriously, you would need, as they say, a heart of stone not to laugh at the portentous voiceovers and melodramatic dialogue -- "These silences to which you confine me are worse than death!" -- accompanied by that hilariously cheesy organ music by Francis Seyrig (who should have known better).

And yet, and yet. The film still has something -- a mood, an atmosphere, a mise-en-scene, whatever you want to call it -- that gets under your skin. On the most basic level, it's a mystery, maybe even a ghost story, and despite the quintessentially French merde de taureau quotient (courtesy of screenwriter/novelist/poser Alain Robbe-Grillet) and Resnais' glacial pacing, it works. More important, it's absolutely ravishing to look at; this is not some grainy 16mm experimental film, but rather a gorgeously pictorial movie movie with a marvelously expressive moving camera, constantly on the prowl through seemingly endless opulently art-directed hallways and baroque mirrored corridors. Even when you're checking your watch you can't help marvelling at what's onscreen, and that includes the composer's daughter Delphine Seyrig, the ravishing co-star.

Here's the re-release trailer (included in the new package) to give you an idea.

Criterion's presentation of all this is light years beyond impeccable. I haven't seen the Blu-ray, but the transfer (supervised, as I mentioned, by Resnais) on view on DVD is breathtaking, with more detail and clarity to the black-and-white images than I would have thought possible; it's like watching really great engravings come to life. The supplemental material, on both sets, is also fascinating; a brand new audio interview with the director, a new making-of documentary, two early Resnais shorts, and the original theatrical trailer along with the newer one above.

Bottom line: You can -- and probably should -- preorder it here.

And now, since things are going to be relatively quiet around here until Monday, let us turn to the latest of our traditional weekend fun projects --

One of surrealism's pioneering works, obviously, with imagery that remains unforgettable. In fact, the scene where the artist character finds an actual living mouth in the middle of his palm and slowly lowers it to his crotch before a fadeout is among the most startling scenes in all of cinema, and by startling I think I mean gay. Not that there's anything wrong with that, of course.

The 3D here, in the service of one of the great visual stylists in movie history, would be more than enough reason for this to make the list, but that's not even counting the film's jaw-droppingly bizarre plot. I don't want to give anything away, so let's just say that the not-glimpsed-until-the-finale Lord of the Manor whose disappearance sets the story in motion has much more than you'd probably believe in common with the titular hero of Chuck Jones' One Froggy Evening.

Possibly the most subtly poetic horror film ever made, and one whose original American title -- The Horror Chamber of Doctor Faustus -- lacked that certain je ne sais quoi that truly said "I don't know what."

A Clint Eastwood Spaghetti Western on acid, obviously, and quite deliriously unreal. Best scene: The titular hero, in full Man With No Name drag, walks into the corral at a rabbit ranch and puts out such an intense vibe that thousands of bunnies simply curl up and die at his feet.

And the number one what-is-reality? flick quite self-evidently is ---

The King of Rock and Roll, with his hair dyed blond a la Gorgeous George, shakes hands, and much else, with himself. A prime example of a genre that Greil Marcus famously observed would be invented by future film scholars to describe the most indescribable of Elvis' often unfathomable films -- Le Cinema Discrepant.

Awrighty, then -- and your choices would be????