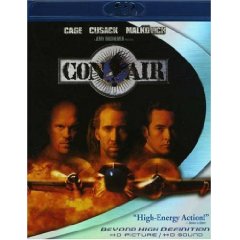 Say what you will about the Clinton Era, but it truly was a Golden Age of a particularly, and in a perverse way innovatively, stupid kind of genre flick. Ludicrously plotted (believability is for losers -- winners go home and f**k the prom queen, to paraphrase a character from The Rock, a classic of the genre), full of embarassing faux adolescent macho (see: the previous paraphrase), and with more scenes of things going kaboom! than most people have had hot meals, these films nonetheless captivated our Noble Republic (and audiences worldwide) throughout the decade, and their descendents -- then as now usually the work of either Jerry Bruckheimer, Michael Bay or both -- remain the most reliable moneymakers in contemporary film.

That said, I would be remiss if I didn't mention another high water mark of 90s Le Cinema Moronique, the otherwise astoundingly stupid Jerry Bruckheimer 1997 action flick Con Air in which -- seemingly out of nowhere -- the screenwriter (the otherwise utterly reprehensible Scott Rosenberg) slips the most intentionally funny line of its era, if not all of screen history, into the mouth of the deliciously deadpan Steve Buscemi.

Here's the clip -- watch for Buscemi at approximately 6:33 minutes in.

Short version: A bunch of convicts take over the plane that's supposed to be flying them to a maximum security prison. With the guards overcome or dead and the plane seeming en route to a foreign country and freedom, the convicts -- all of whom are drooling sociopaths, BTW -- pull out a boom box and start getting down to the strains of the Lynyrd Skynyrd redneck classic "Sweet Home Alabama."

At which point, Buscemi (a serial killer, in restraints) looks at the camera and says --

"Define irony: A bunch of idiots dancing on a plane to a song made famous by a band that died in a plane crash."

After that, there's little that I can add except to say you can -- and perhaps must -- order the deluxe Blu-ray version of Con Air here.