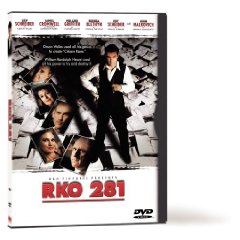 This one isn't really lost -- more like lost in the shuffle, which is to say you probably missed it if you don't have HBO.

I refer, of course, to the fabulous 1999 docudrama on the backstage intrigue behind the making of Citizen Kane -- director Brian Ross' RKO 281. Starring Liev Schreiber as Orson Welles, John Malkovich as his co-screenwriter Herman Mankiewicz, Roy Scheider as RKO studio exec George Schaefer, the imcomparable Fiona Shaw as deeply reptillian Hollywood gossip columnist Hedda Hopper, James Cromwell as legendary press lord William Randolph Hearst, and Melanie Griffith as his mistress, actress Marion Davies -- the latter two, of course, being the characters that Welles unflatteringly portrayed (in barely fictionalized form) in Kane, which is what sets the film in motion.

RK0 281 (the title refers to the studio code for the Kane production in progress) was written by John Logan, just prior to his Oscar nomination for Gladiator, and it's based on an excellent 1996 PBS documentary , The Battle Over Citizen Kane, which also behooves beholding. Logan's script has two central conceits -- that the events surrounding the creation of Welles' boy wonder masterpiece have eerie parallels in the film itself and that although Welles didn't realize it at the time, Kane, both film AND character, could eventually be read as depressingly prescient of the arc of his entire career. 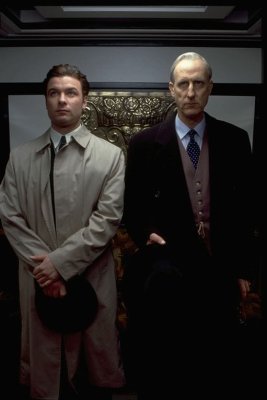 Both of those insights strike me as inarguable, and although Logan takes a few liberties with real events, none of them are fatal. Overall, in fact, the story is mostly told just the way it happened, with the period detail rendered smashingly, and the rest of the actors who play the various real-life Hollywood characters who show up quite cannily cast; I particularly like Kerry Shale as genius Kane composer Bernard Herrmann (who Andre Previn famously said was "pound for pound the most eccentric character I ever met.") My favorite touch, however, is the ending; Logan invents a should-have-happened-but-didn't chance meeting between Welles and Hearst in a NYC hotel elevator on the night of the film's premiere; Welles actually offers the presslord a pair of tickets, which Hearst declines, and the following dialogue ensues.

Hearst: My battle with the world is almost over. Yours is just beginning.
Welles: [shouting after Hearst as he exits] Kane would've taken the tickets!

Those are, of course, words that Welles could easily have put into the mouth of Kane himself, and it makes an amazing capper for the film, although the second best line in the film is from Mankiewicz, drunk in the lobby of the Kane premiere, moments later.

I should also note one more bit of sly casting -- the great Brit actor David Suchet, who's almost always employed as a scary Islamic terrorist, playing MGM mogul Louis B. Mayer, who (along with, ultimately, the rest of his fellow Hollywood studio heads) gets seriously Jew-baited by Hearst in one of the film's most chilling scenes. Oh, and while Schreiber doesn't really do a Welles impression, he gets his essence, both the vaguely fleshy charisma and sex appeal AND the self-doubt behind the brash genius blarney.

Here's the trailer to give you a little taste, including a too-brief flash of a way cool re-staging of a famous scene from Kane.

Bottom line: A riveting meditation on both the making of a masterpiece and the moral implications of genius; you can -- and should, immediately, order it here.