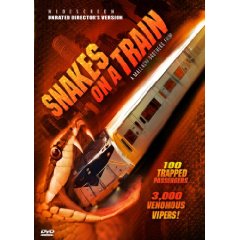 If you were with us last Thursday, you may recall that a friend of mine -- a guy with an appetite for utter cinematic crap that exceeds even my own -- had just turned me on to a direct-to-video marvel called Transmorphers. Which was, in fact, a delightfully awful low-budget tip of the hat to a certain Michael Bay-directed film about giant talking General Motors cars from outer space that had captivated our noble Republic and spawned a sequel that's been one of this summer's biggest hits.

But as it turned out, the film -- produced by a studio charmingly monikered The Asylum -- had a much more amusing backstory than I'd suspected. To wit, The Asylum guys have made a very profitable career out of producing what they call "mockbuster" films. Basically, their business model consists of rushing shameless rip-offs of whatever eagerly awaited studio genre picture is in the pipeline onto DVD in advance of the genuine articles; in the case of Transmorphers, it differed from the Shia LeBouef blockbuster primarily in its less than convincing special effects and totally gratuitous lesbian subplot (that last, as I said at the time, is, of course, a good thing, but let's move on).

In any case, I've been checking out some of their other efforts, and I think this one is now, on balance, my favorite.

Ladies and germs, behold in breathless wonder The Asylum's incredible Snakes on a Train, an action/horror B(?)-movie released direct to DVD on August 15, 2006, a full three days(!) before the theatrical release of the perhaps more notorious Samuel L. Jackson epic Snakes on a Plane.

A woman suffering from a Mayan curse -- which causes snake eggs to hatch inside of her and eat their way out -- is taking a train to Los Angeles where she hopes a shaman can free her from the spell. Needless to say, she's traveling with some of the already hatched reptiles in small jars; when she gets on the train, bandits accost her and the snakes escape, terrorizing everybody else on board. Eventually, she transforms into a gigantic snake herself and proceeds to swallow the train whole. The End. Or is it?

Here's the trailer, in case you think I'm making any of this up. Wait for the shot of the giant snake eating the train at the very end.

As you'll note from the above, while the DVD box promises "100 Trapped Passengers - 3,000 Venomous Vipers" (marked down to 1,000 in the trailer), in reality there are only about a dozen passengers and a handful of snakes. It should also be noted that while the train interiors were actually shot in an old post-World War II streamliner (which is to say, outdated for a Los Angeles-bound train for at least three decades) the stock footage used for the train exteriors appears to change magically, into different models from different time periods, throughout the film. I mention this, of course, in full knowledge of Emerson's dictum that "consistency is the hobgoblin of small minds."

In the meantime, you can read a, shall we say, informative interview with Eric Fosberg, the valiant screenwriter of this chef d'ouevre, here.

You can also -- and if truth be told, I think absolutely must -- order the DVD here.