No Country For Old Men? 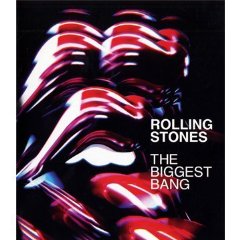 Okay, this is a bit far afield from our normal movie musings, but speaking as we were (not really) of Incredibly Old Rock Bands, I have to say that depending on my mood, I mostly think of myself as a lapsed Rolling Stones fan these days. Oh sure, I still love their body of work (let's face it -- their run of albums between 1968 and 1972 remains unsurpassed), there have definitely been nights (including one or two when I was lucky enough to be in the audience) that they were in fact, as billed, the greatest rock 'n' roll band in the world, and the idea that Keith Richards will probably outlive me -- hell, he'll probably outlive cockroaches as a species -- is a source of constant hilarity here at Casa Simels.

That said, it's obviously hard to make a case for them as a truly vital creative force any more, and I think we can all agree that they've made way too many live albums and concert movies (see -- I worked movies in after all!) over the years. Martin Scorsese's recent Shine a Light, for example, was pretty entertaining in a lot of ways, but it couldn't hold a candle to the still not on video Ladies and Gentlemen, The Rolling Stones from 1973. Besides, I'm just not sure I want to watch 70 year old guys, no matter how well preserved, sing about sex anymore.

Okay, all that stipulated, I just saw the Blu-ray of some of their recent (2006) concert stuff -- the charmingly monikered The Biggest Bang [UMVD]-- and (with reservations) I kvelled for the Stones all over again. Partly, this is because the Blu-ray is, well, cool in and of itself; I love the sort-of interactive menu, and the High Def picture and uncompressed PCM audio are state of the art. It's also because the performances, while uneven, are mostly on the money; these guys may be on some level an oldies act, but goddamn if they aren't a hell of a live band anyway, with an energy level that should shame some groups half their age.

But what sealed the deal for me is some brief footage of the guys before a show in Austin. They're warming up in the dressing room, looking and sounding for all the world like the greatest garage combo that ever was, and then there's a scene of Keith and Charlie Watts (and eventually Ron Wood, who's still smoking in both senses of the term) falling into a groove on a run-through of Buddy Holly's gorgeous "Learning the Game" that pretty much says it all. In other words, there's a reason these guys are still doing what they're doing at their age, and it's pretty obviously not just the money. Seriously, if this bit doesn't make you smile, you really need to have it looked at.

I couldn't find a clip of the sequence so you'll have to take my word on how terrific it is. But here's the on-stage Biggest Bang version of the song, which is also pretty cool.

Anyway, lapsed fan or no, this one got to me. You can -- and if I were you, definitely would -- order it here.