Nonsense on Stilts (An Occasional Series) 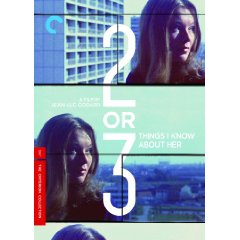 You know, in an age when people are slathering themselves with a fragrance from Britney Spears, or when a former candidate for Vice President can declare "It is as throughout all Alaska that big wild good life teeming along the road that is north to the future!" in a farewell speech, you'd think that nothing egregiously stupid could surprise me anymore.

Thankfully -- and I mean that in all sincerity, since I was at a loss for a subject today -- that turns out not to be the case.

Consider, if you will, the following quote from a recent review of two new Criterion Collection DVDs of 60s classics by Jean-Luc Godard -- Made in U.S.A. and 2 or 3 Things I Know About Her. The venue is a fishwrap called The New York Press; the reviewer (if that is the word) is the irrepressible Armond White.

Both these widescreen spectacles can help remind moviegoers how important it is to appreciate movies as a visual art form that represents the world and the imagination with creativity and integrity. That's what is missing from the Harry Potter junk where imagery is corrupted into tired, over-familiar, non-visceral special-effects. Made in U.S.A. and 2 or 3 Things have more in common with the visual wit of Michael Bay's Transformers 2. It is Godard's bold example that taught Bay to love sound and image.

In case you're wondering, yes, you read that right -- the reviewer (again, if that is the word) is seriously comparing the ouevres of Jean-Luc Godard and Michael Bay.

Words, frankly and mostly, fail me after that. But let's just say that, if pressed, I think I probably could learn to distinguish between Godard muse Anna Karina...

and a giant talking General Motors car from Outer Space.

Why that capability eludes White is a mystery -- like the secret formula that makes Orange Julius so devilishly delicious -- that may never be solved, alas.

In any case, you can -- and despite White, probably should -- order those Godard DVD's over here.

Tags: Britney Spears, Jean-Luc Godard, Made in U.S.A., 2 or 3 Things I Know About Her.
Print