(Really) Great Lost Films of the 70s: An Occasional Series 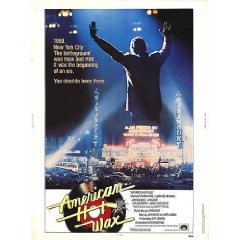 Okay, perhaps "lost" isn't exactly the right word; maybe "willfully mislaid" would get it more precisely. Still, what else would you call a major studio release of the 70s, a film with a positive critical reputation and a bigger than some cult following (and one that generated a best-selling soundtrack album fer crissakes) -- and yet it has never been available on home video, either on tape or DVD? 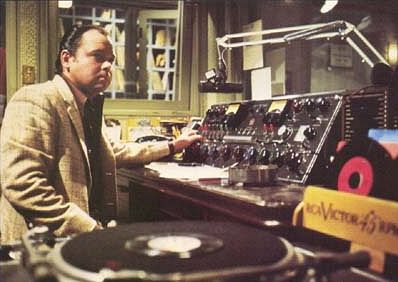 Short version: The film portrays a week in the life of the deejay as he prepares to stage an all-star rock 'n' roll show at the Brooklyn Paramount Theater in 1958. Freed is played, heartbreakingly and brilliantly, by the late and incredibly great Tim McIntire, an amazing actor who died way too young in 1984; apart from this role, he's probably best remembered for his hilarious and sardonic work as the voice of the mutant telepathic dog opposite the young Don Johnson in the sci-fi cult classic A Boy and His Dog. Chuck Berry and Jerry Lee Lewis are among the 50s rock giants who play themselves; the rest of the cast is rounded out by SNL star Larraine Newman as an aspiring Carole King-ish songwriter (the wonderfully monikered Teenage Louise), a pre-Nanny Fran Drescher as Freed's put-upon secretary, and a pre-almost everything Jay Leno as Freed's perennially horny chauffeur.

The film takes some historical liberties (the most hilarious involving Berry doing the concert for free after the IRS, out to get Freed by any means possible, seize the gate receipts), but it's very sharp on the not so veiled racism of the period and IMHO there has never been a movie that captured the excitement of a nascent cultural and musical moment as vividly as this one; most everybody in the film positively lives and breathes music, even the pizza delivery boy played in a cameo by the then teenaged Cameron Crowe, and I can't imagine anybody failing to get caught up in it, even the kind of grinch for whom first generation rock and r&b is the esthetic equivalent of root canal.

Here's a little scene from the beginning of the concert sequence. Note the amazing Screaming Jay Hawkins, in full mau-mau gear, as himself at the end . Really, as Nick Tosches famously observed, and to think people thought a wimp like Alice Cooper was scary fifteen years later.

Seriously, if that bit doesn't get to you, you really need to have it looked at.

In any case, as I said up top, the film has never been available either on VHS or DVD, and I just learned, via Amazon, that the double LP soundtrack album (one disc well chosen vintage 50s oldies, the other disc live stuff from the concert sequence) has never been on CD either.

I can only speculate on how such a cultural tragedy -- and I think it is one -- came to pass, but it seems most likely that it has something to do with the myriad of music clearances that would have to be renegotiated (there are something like forty songs and/or old records involved) in order to get the thing out into the public sphere again. I'm told that producer Art Linson dicusses the film's fate in his recent memoir What Just Happened? Bitter Tales From the Hollywood Front Lines, which is available here, but I haven't read it yet, so I'll get back to you on that.

In any case, if you hear of a showing of this on a cable channel any time soon -- pounce.

Oh, and one more thing -- an old bud of mine was a second A.D. on the picture, and he told me that at least one sequence was cut from the final version of the concert -- none other than future E-Street Band member Nils Lofgren as Ritchie Valens. Singing La Bamba several years before Lou Diamond Phillips lipsynched Los Lobos in the Valens biopic of the same name. What I wouldn't give for a boot of that one, obviously...