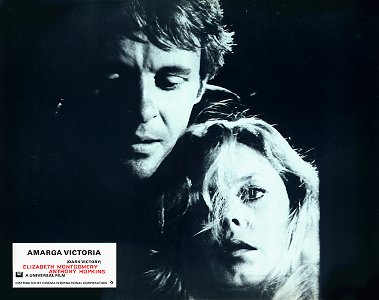 And just in case anybody thinks we were making fun of the great Elizabeth Montgomery yesterday -- which we most certainly were not -- I'd be remiss if I didn't bring up another of her wonderful small screen performances that's not, alas, on home video.

The plot, although updated, remains more or less the same as before. Montgomery stars as a successful TV producer (an heiress in the Davis version) who suffers from headaches. Her doctor (Hopkins) knows that the ailment is an incurable brain tumor, but at first he keeps the information a secret from her; when she finally learns the truth, she's bitter and resentful and stars floozying around, but eventually she falls in love with the doc and marries him for the possible six or so months of happiness left to her (in anticipation, one presumes, of the celestial choirs on the soundtrack at the end -- provided by composers Max Steiner in the original and Billy Goldenberg in the TV remake.)

Like I said, there's never been an official home video version of this that I can find, but just about all of it is now up at YouTube. Here's a scene of the star-crossed lovers in a happy moment, before they (you should pardon the expression) face the music.

As you can see, this is actually rather more affecting than I for one expected. As you can also see, Liz is clearly suffering in the clip from what those of us in the film-crit biz refer to as The Movie Disease. That's the technical term for a syndrome peculiar to motion pictures (usually but not always of the Hollywood star vehicle variety), in which the protagonist (usually but not always the heroine) spends most of the film dying from some (not necessarily specified) medical condition whose main symptom is that the sufferer becomes more luminously beautiful the closer they come to actually expiring. For other examples, see Ali McGraw in Love Story, Debra Winger in Terms of Endearment, or Jeff Goldblum in The Fly (okay, just kidding about that one.)

In any case, as I said -- an unjustly overlooked little film. For more on the '76 Dark Victory -- including stills, a contemporary review, and a link to order a (presumably) legal DVD -- make sure you click here.