Transmorphers: Less Than Meets the Eye! 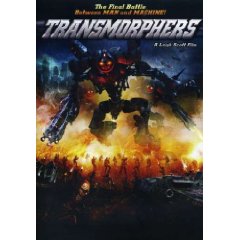 Imitation, said the great comedian Fred Allen, is the sincerest form of television, and in that spirit I was intrigued the other day when a friend of mine -- a gent with a highly developed appetite for absolute cinematic crap that rivals and perhaps even surpasses my own -- took me aside and recommended in the strongest possible terms a direct-to-video sci-flick that, he assured me, had to be seen to be believed.

Which we'll get to in a moment, but first -- Steve's Movie Reviews©!!!

Brüno --Not as minty fresh as "Borat," and at times the line between making fun of homophobia and actual homophobia gets a little blurry. But mostly paralytically hilarious, and any movie that demonstrates that Ron Paul is a clueless bigoted twit is by definition a good one.

Transformers: Revenge of the Fallen --A civil war between giant talking General Motors cars (some of whom talk like homeboys) from outer space? Genius! That said, the run time is a breathless two and a half hours, but it only feels longer than "Berlin Alexanderplatz."

In any case, the film in question was called Transmorphers (2007), and yes, it was a shameless low-budget pastiche of you know what. Here's the first couple of minutes to give you a little taste.

Anywho (and apologies if this is old news to everybody) it turns out that the film has a more amusing backstory than I anticipated. In fact, it was one of the first efforts of a company called The Asylum, the brainchild of a couple of fugitive execs from the somewhat more respectable Village Roadshow Pictures.

Basically, what these guys do is get shameless rip-offs of whatever big budget studio genre picture is in the pipeline onto DVD in advance of the genuine articles; in the case of Transmorphers, it differed from the Shia LeBouef blockbuster primarily in its less than convincing special effects and totally gratuitous lesbian subplot (that last is, of course, a good thing, but let's move on). Other recent Asylum "mockbusters" (their preferred term) include The Da Vinci Treasure, Snakes on a Train (heh!), Allen Quartermain and the Temple of Skulls, Sunday School Musical (for the Christian market, natch) and in 2008 The Day the Earth Stopped, which caused 20th Century Fox to threaten legal action (actually, they should have sued Keanu Reeves for crappy acting instead).

By any objective standard those films may in fact be appallingly bad (and Transmorphers certainly fits that description) but there's a part of me that finds the whole business utterly hilarious and as far as I'm concerned The Asylum guys should be encouraged by all who walk upright. Obviously, they've inherited the outlaw spirit of the great Roger Corman, who in 1993 rushed a low budget flick called Carnosaur into theaters a month ahead of Spielberg's Jurassic Park, and told a reporter, with a thoroughly straight face, "I know Stephen -- he's an honorable guy; I don't think he's trying to rip me off."

Needless to say, you can -- and if particularly perverse of eyes probably should -- order Transmorphers here.