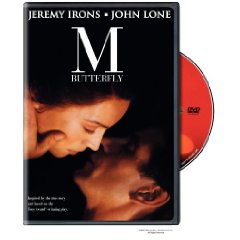 Video Event of the Week: Is it Sony's new DVD of The Strange One, a rarely seen gays-in-the-military drama with Ben Gazarra and George Peppard? Could Disney's disc of The Jonas Brothers: The 3D Experience concert flick possibly get the nod? Or is there even the slightest chance that Fox's Blu-ray of 12 Rounds, the latest action flick starring wrestler John Cena and directed by the increasingly risible Renny Harlin, possibly be The One?

All worthy, to be sure (well, not that last, obviously) but for my money it's got to be Warner's remastered version of M Butterfly, David Cronenberg's 1993 adaptation of the sex role-bending stage play by David Henry Hwang .

Actually, this has been out for a couple of weeks, but cut me some slack -- there's been a lot of stuff to ponder of late. Besides, I wanted to write about it because Cronenberg is currently having one of the most interesting third acts of any big deal Hollywood director in memory and (to be honest) I missed this when it first came out theatrically.

The story (inspired by a true incident) is, of course, a fascinating one, with Jeremy Irons playing a married French diplomat, stationed in Beijing in 1964, who finds himself falling head over heels for a Chinese opera performer (John Lone of The Last Emperor) that he believes is a woman. The gender-f**k theme gets played out against the backdrop of history -- the brutal Chinese Cultural Revolution of the 60s intrudes in terrifying fashion -- and playwright Hwang's script also deals, rather wittily, with the biases of both of the protagonists (Lone's character is actually a bit of a bigot). There's also an obvious metaphorical what-is-reality? element here, and the duo's relationship has hall-of-mirrors parallels to that of the Puccini opera that provides the title.

Critics (and audiences, apparently) back in the day seem to have been flummoxed by the fact that Lone is obviously a guy, but I must say I don't see that as a problem; he's so gorgeous and so seductive (his vaguely Peter Lorre-ish accent is a hoot) that it doesn't strike me, at least, as unlikely that some nerdish functionary could tumble for him and remain in denial about his gender. In any case there's no doubt whatsoever that the character as Irons plays him is absolutely, and rather heartbreakingly, gaga. Actually, my only cavil with the piece is that Hwang really hasn't opened it up all that much and that despite Cronenberg's best efforts it remains a tad stage-bound, although the director does manage some visuals (in the opera scenes, in particular) that will haunt your imagination.

That said, this is one of those films that I think is definitely due for re-evaluation. Warner's new transfer, I'm happy to report, is quite spectacular, with almost eye-popping color and detail (the stylized animated credits sequence is worth the price of admission) and rich, enveloping surround sound (the better to experience yet another supremely effective score by long-time Cronenberg collaborator Howard Shore, who may be the most underrated and versatile film composer currently working). There's also a very interesting new interview with Cronenberg, who talks at some length about why a guy (at the time) mostly identified with horror and related genres was drawn to the project; as he points out, many (if not all) of his earlier films, particularly The Fly and Dead Ringers, were also about the nature of identity.

Bottom line -- a fascinating film and an exemplary package. You can -- and definitely should -- order it here. 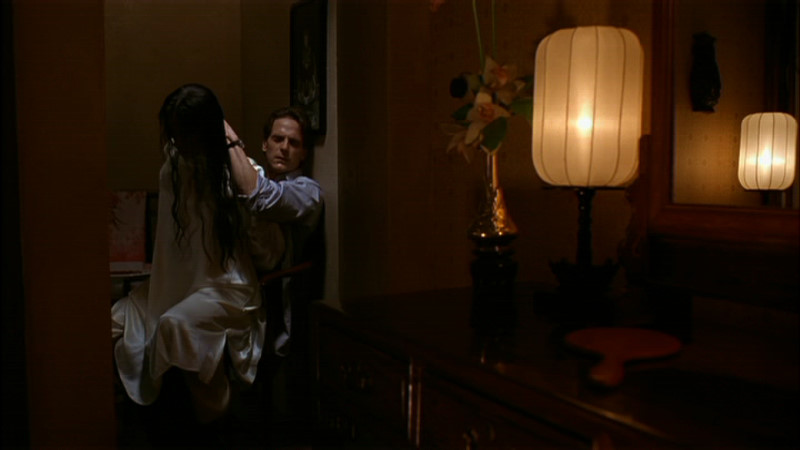 And since things are going to be relatively quiet around here until Monday, here's a fun and obviously relevant project for us all to contemplate --

Most Memorable Film Featuring a Shady Dame (Male OR Female)!!!

The divine Jane Greer, my favorite film noir babe, betraying Robert Mitchum, Kirk Douglas and everybody else in sight. Talk about kiss me deadly.

The divinely rumpled (and scary as hell) Ann Savage, my second favorite film noir babe, proving that Sartre was right -- hell IS other people -- in Ulmer's beyond remarkable low-budget thriller. BTW, Savage showed up last year in Guy Maddin's My Winnipeg, which definitely behooves beholding. 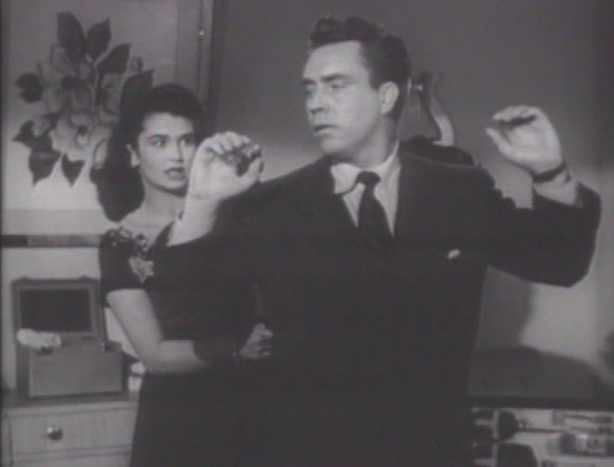 Top-billed Edmund O'Brien is Frank Bigelow, a poor sap who's been fatally slow poisoned and has two days to find his murderer. But the character that really does it for me is Marla Rakubian, a femme fatale played by the memorably ripe Laurette Luez who may or may not be up to her pretty little neck in the conspiracy. The coolest plot in all of noir, obviously, and it occasions some pretty snappy dialogue as well.

Marla: If I were a man, I'd punch your dirty face in!
Frank: You know I really believe you would!

The Citizen Kane of transvestite killer shrink movies, and every bit as good as as that sounds. That's Michael Caine under the wig, in case you haven't seen this uniquely over-the-top genre exercise, which (perhaps tellingly) also features de Palma's then wife Nancy Allen as a sleazy hooker.

And the most memorable film featuring some "woman" you shouldn't trust as far as you can throw "her," self-evidently is --- 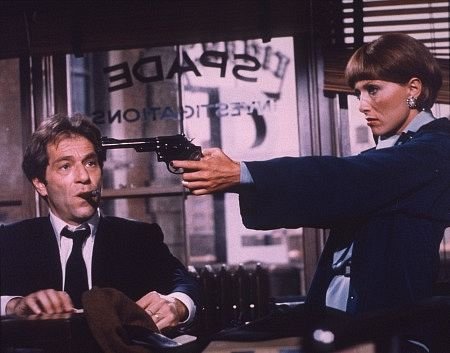 Chabrol, Buñuel and Rohmer muse Stéphane Audran is the beautiful and androgynous daughter of the Russian general who once owned the real Maltese Falcon in a comedy sequel to the Bogart classic. For what it's worth, I seem to be the only person in the world who thinks this film is a hoot, but I think there's one thing we can all agree on -- Audran has quite the most astonishing cheek bones.