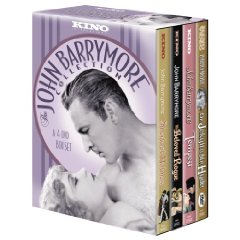 Video Event of the Week: Is it Lionsgate's new box set of the way cool Advertising is Hell TV 60s period piece Mad Men: Season 2? Might Shout! Factory's Peyton Place: Part Two, the TV 60s primetime soap featuring Mia Farrell and Ryan O'Neal, perchance get the nod? Or could HBO's Grey Gardens, the feature film version of the classic documentary starring Jessica Lange and Drew Barrymore as the bonkers Beales of East Hampton, conceivably be The One?

All worthy, to be sure, but for my money, it's got to be Kino Video's terrific four-disc box set of classic silent films featuring The Great Profile -- The John Barrymore Collection. 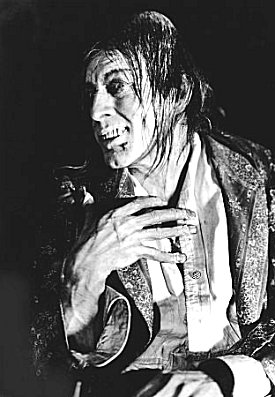 The films in question -- Dr. Jekyll and Mr. Hyde (1920), Sherlock Holmes (1922), The Beloved Rogue (1927) and Tempest (1928) -- are a mixed bag on a number of levels, but all of them are designed to showcase Barrymore's striking good looks and/or athleticism; essentially, the personna he projects is Douglas Fairbanks Sr. with sex appeal. As I said, however, they're a mixed bag. Jekyll, for instance -- it's often considered the first important horror film -- is an interesting mix of prurience and moralism; unlike some of the other versions of the story, the operative metaphor for Jekyll's condition seems to be what used to be called, quaintly, a social disease (we actually see little wiggling single celled organisms under his microscope as he researches the potion that will transform him). Rogue and Tempest, however, are full throttle costume adventures, and splendid examples of the full flowering of late silent cinema; they feature fabulous art direction by the great William Cameron Menzies and a highly sophisticated use of moving camera; by comparison, Jekyll and Sherlock Holmes (the latter making its video debut from a restoration by the George Eastman House) are fairly static and stagey. 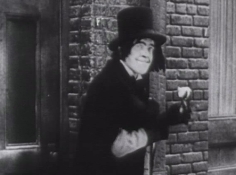 About the set itself, there's good news and bad news. The prints of all four, though from the best possible sources, are widely variable, with Rogue and Tempest looking disappointingly soft at times (Jekyll, though older, actually looks a little crisper, although the print has a bit more wear and tear in patches.) There's some terrific bonus material, however, particularly on the Jekyll disc, which features an excerpt from a competing 1920 film version of the story starring the forgotten to history Sheldon Lewis, and an absolutely amazing 1909(!) audio version of the J&H transformation by vaudevillian Len Spencer; it's got music and sound effects, and it plays for all the world like a radio drama from decades later. The best, however, is a one-reel parody -- Dr. Pyckle and Mr. Pride -- starring Stan Laurel just months before joining forces with Oliver Hardy for the first time. Stan's fiendish Mr. Pride hops around like a demented stick insect and does truly evil things like using a pea shooter on unsuspecting kids or sneaking up behind old ladies and popping paper bags by their ears. It's a genuine hoot, in other words, and it's almost worth the 45 bucks for the set on its own.

Bottom line: On balance, a terrific set; you can -- and probably should -- order it from Kino here.

Which leads me, since things are most likely going to be a little quite around here till Monday, to another fun and obviously relevant project for us all to contemplate --

Most Memorable Screen Version of an Often Filmed Story!!!

Sci-fi writer Jack Finney's pod people from outer space, obviously. This has been remade at least three times over the years (most recently with Daniel Craig and Nicole Kidman) but the original remains by far the most chilling version. Incidentally, back in the day, somebody asked director Siegel if he meant the film as a parable of Cold War anti-Communist paranoia. His reply: "It's about Hollywood."

There have been countless (well, maybe ten or so) versions of this over the years on both the big and small screen, but for me anyway this Hammer version remains definitive. What a shame Peter Cushing never got to take on the Great Detective again.

Obviously there's no definitive version of this (or any other Shakespeare play for that matter), but I have a sentimental fondness for this one having seen Nicol Williams (with Richardson directing) do it on Broadway. In any case, Marianne Faithfull's Ophelia is the best EVAH.

There've been at least three remakes of this one (including one with David Carradine in outer space), but the original is obviously the coolest, largely due to star Toshiro Mifune. C'mon -- has there ever been an actor who rubbed his chin more interestingly?

And the numero uno version of a familiar tale, it's so freaking obvious I just want to smack you for having thought of anything else, has got to be --

The perhaps inevitable gender-f**k remake of the classic tale, via Hammer, and obviously a metaphor for...something. Actually, given star Ralph Bates odd resemblance to Moulty from The Barbarians, I've always been pissed off they didn't score the transformation scene above to "Are You a Boy or Are You a Girl."