Chicks in Their Underwear -- Could Be a Hot One! 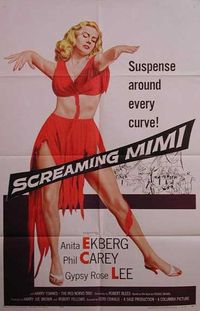 Ah, YouTube -- truly, it's the 21st century equivalent of the Library at Alexandria. I bring this up because this time last year I posted about a fabulously lurid B-movie -- Gerd Oswald's 1958 film noir Screaming Mimi -- and at the time I couldn't find a video clip for you sleazoid thrill-seekers (hey -- you know who you are). And now, I'm happy to report, I have (see below).

Anyway, if you've never caught it, Mimi is an uber stylish low budget thriller based on the pulp novel by the great Fredric Brown. Director Oswald, of course, was a prolific B-movie and TV auteur whose best stuff (including the several Outer Limits episodes he helmed) had a wonderfully distinctive German Expressionist look, and Mimi has it in spades.

And how's this for a plot :

Exotic dancer Virginia Wilson (the amazingly full-figured Anita Ekberg) sees a man get shot moments after he tries to knife her in a shower (two years before Psycho). She goes to a psychiatrist, but he falls in love with her and takes over her life, although she insists on continuing her career at a sleazy dive called El Madhouse. The club's tough owner is a lesbian beatnik played by Gypsy Rose Lee, who sings an incredibly bad version of "Put the Blame on Mame" (the classic number from Gilda) while Virginia is being stalked by a serial killer. Who may or may not actually be her. Or something.

Trust me, it's all quite wonderfully disreputable -- how they got Lee's character past the 1958 censors is a mystery that may never be solved -- and it also benefits immeasurably from the presence of the great tough guy actor Philip Carey (until his recent death, a regular on the ABC soap One Life to Live) as a hardboiled newspaper columnist who figures the whole thing out, thus earning the audience's undying gratitude.

Anyway, check out this Lang-ian (as in Metropolis) nightclub scene. That's Carey in the balcony, rather pointedly NOT looking down on Ekberg's astounding bondage dance. Note also the presence of several, how shall we say, women-oriented women in the audience. Have I mentioned that this is 1958?

Oh, and incidentally -- a coveted BoxOffice No-Prize© will be awarded the first reader who twigs to where I stole today's column title from. No Googling!!!