Great Lost Movies of the 80s (An Occasional Series) 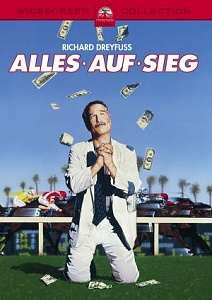 Said it before and I'll say it again -- some movies, alas, are born obscure, while some achieve obscurity and others have obscurity thrust upon them.

In the case of the 1989 Let It Ride, a wonderful shaggy horse racetrack comedy starring Richard Dreyfuss, Teri Garr and a hilarious ensemble cast, I can only assume it's some weird combination of the three. (Incidentally, I'm not recommending the German version, despite the graphic to the right; I just think it looks amusing. So sue me.)

The ad campaign tagline: "He drinks. He smokes. He gambles. He curses. He thinks about committing adultery. You'll love him."

The plot (which is slight but charming):

Habitual gambler and perpetually broke schlemiehl Jay Trotter (Dreyfuss) is still in love with his estranged wife Pam (Garr). As the movie begins, his cab driver best pal Looney (David Johansen, a hoot) surreptitiously tapes two passengers talking about a horse guaranteed to win an upcoming race. Looney passes the tape to Trotter who heads to the track to bet, despite having just told Pam he's giving up gambling for good. Once there, he puts down a borrowed 50 on the nag, which wins in a photo finish, and he winds up ahead 700 bucks. After that, he confronts the guys from the cab who give him a tip on another horse and he scores a second time. The rest of the film, with Trotter interacting with all sorts of colorful characters (both upper and lower crust, including two dishy women who suddenly want him) leads inevitably to a big race finale in which he'll either parlay enough to quit for life and get Pam back, or blow it all and remain a loser.

That summary doesn't do the film justice; it certainly doesn't give you a clue to the script's wonderful Damon Runyon-esque dialogue or to how hysterical the folks Dreyfuss encounters along the way actually are. Garr, of course, is funny, sexy and touching as always, with a big comic freak-out drunk scene that should have gotten her an Oscar nod; Robbie Coltrane is (for want of a better word) adorable as a betting clerk who develops a serious case of hero worship for Trotter; and Michelle Phillips, looking gorgeous and sly, all but steals the film as a high class rich dame who fools around on her husband (who's at the track on a respirator). One of her scenes with Dreyfuss includes the following absolutely classic exchange.

As I said, the flick is inexplicably obscure, so it's not exactly a surprise that there isn't much of it on YouTube. Here's the only clip I could find -- it's a collage of scenes featuring Jennifer Tilley as the bombshell younger mistress of a nouveau riche vulgarian played by Allen Garfield, but it should give you at a little idea of the film's shambolic charms.

In any case, the film, thankfully, is available on DVD; you can -- and definitely positively should -- order it here.