How Bad Could It Be? (An Occasional Series): The Witch is Back 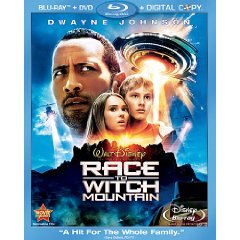 Just got done (well, yesterday, to be more accurate) watching the new Disney Blu-ray/DVD combo edition of Race to Witch Mountain, the kiddie sci-fi starring The Actor Formerly Known as The Rock. Race, of course, is a sort of remake of two fondly remembered (by some) 70s Mouse Factory flicks, (1975's Escape to Witch Mountain and 1978's Return From Witch Mountain). I myself am not one of those who remembered the originals fondly; in fact, I watched the recent disc versions -- my first experience with the films -- a few weeks ago and thought they were pretty cheesy. But since the new one features Watchmen siren Carla Gugino (woo-hoo!), the special effects in the trailer looked promising, and because I'm (within reason) a fan of star Dwayne Johnson, I figured it might be worth a look.

Ex-con turned Vegas cabbie Jack Bruno (Johnson) picks up Dr. Alex Friedman (Gugino) who's lecturing at a UFO Convention at Planet Hollywood. After he drops her off, he finds teen siblings Sara and Seth in the back of his cab; they ask him to take them to a middle-of-nowhere spot outside town. Meanwhile, government agents, having found a crashed spaceship, are chasing two aliens who've escaped the wreckage(guess who?) Jack and the teens wind up pursued by both the Men in Black and a sinister alien Terminator type who's been sent to kill the kids as part of the lead-in to an invasion of Earth (Sara and Seth have been collecting scientific data that will save us, but they need to return it immediately to their home world). Eventually, Jack teams up with Dr. Alex to retrieve the kid's spacecraft at a secret base in the titular mountain, the kids take off, and the Earth is saved. Until the inevitable sequel, of course

Okay, cutting to the chase immediately, the answer to our earlier question is "Not as bad as it could have been." The aforementioned special effects turn out to look, by contemporary standards, every bit as cheesy as the pre-digital work in the original films, and star Johnson spends most of the picture in two not all that different modes -- slightly bemused and slightly bemused but annoyed. That said, the thing moves along smartly enough, and there are amusing supporting performances by the likes of Cheech Marin (as a crotchety auto mechanic) and Tom Hanks simulacrum Tom Everett Scott that might keep adults interested while their undiscriminating eleven year olds (who are doubtless the film's intended demographic) are distracted by the myriad explosions and car crashes.

Also, of course, you can say what you will about Witch Mountain, but at least it's better than G.I. Joe: The Rise of Cobra.

Here's the aforementioned trailer to give you a sense of the thing.

Bonuses on both the DVD and Blu-ray include deleted scenes and a blooper reel; the Blu-ray has an extra featurette in which director Andy Fickman discusses various casting in-jokes and cameos referencing both the original films and some other Disney flicks. Turns out that Kim Richards and Ike Eisenmann, who portrayed the alien kids back in the day, can be glimpsed in the new film as (respectively) a roadhouse waitress and a local sherriff. And the strikingly pretty Meredith Salenger, who starred in Disney's 1985 cult flick The Journey of Natty Gann has a cameo as a TV reporter named "Natalie Gann." For those who care, obviously.

In any case, you can -- and, on balance, if you have kids probably should -- order it here.