How Bad Could It Be? (An Occasional Series) 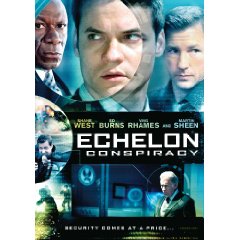 Just got done watching the new Paramount DVD of Echelon Conspiracy, the 2009 high tech paranoid thriller whose title was changed from the more evocatively ambiguous The Gift at the last minute. The film didn't exactly kill at the box office, but I figured that since it starred ER's Shane West (who was quite brilliant last year as doomed punk rocker Darby Crash in What We Do is Secret) along with the always reliable Edward Burns, Ving Rhames and Martin Sheen, it might be worth a look.

On a business trip to Bangkok, computer whiz Max Peterson (West) gets a DHL package with a mysterious cutting-edge cell phone that gives him advice via anonymous text messages. Peterson figures the phone is a freebie promo gift from his hotel, but after he's saved from boarding a doomed airplane thanks to a warning on the weirdly omniscient gizmo, he decides to try out its betting tips at a local casino and wins big. This gets the attention of the casino security chief (Burns), an FBI agent (Rhames), the head of the NSA (Martin Sheen), and the obligatory mysterious femme fatale (Tamara Feldman). Then faster than you can say "exposition" the phone starts making death threats, a sniper takes a shot at him, and the movie develops a body count. So -- who can Peterson trust? Who is trying to kill him and why? And most important, can he roll over his cell minutes?

If the basic outlines of the above sound familiar (and they do) it probably won't surprise you to learn that the villain of the piece turns out to be a government super computer that's developed a mind of its own. Which is to say that this is basically a Lite version of the Shia LeBouef vehicle Eagle Eye (a trailer for which opens the Echelon DVD -- a little irony, there). What is a surprise, however, is that the answer to our title question turns out to be "not that bad at all." West, Burns and Rhames have genuine ensemble chemistry, and director Greg Marcks keeps the plot moving along smartly without resorting to the ridiculous overamped steroidal action movie tropes that made Eagle Eye such a chore to watch.

Also, of course, this doesn't have Shia LeBouef.

I don't want to overhype Echelon Conspiracy -- it's a better than average B-movie, basically -- but you could do a lot worse than check out when it shows up on cable. Or, if you have a little disposable income, you can, of course, order it here.

Tags: Echelon Conspiracy, The Gift, What We Do is Secret, Shia LeBouef, Eagle Eye
Print