If It's Monday, It Must Be Shameless Filler (Special Attack of the Killer Jews! Edition) 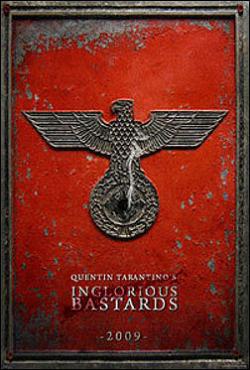 Okay, I think we can all agree that for those of us in the critic business, no less than in any other field of endeavor, it's important to have an open mind, to allow ourselves the occasional exposure to something -- an idea, a work of art, a new recreational drug (just kidding about that last) -- that may challenge our pre-conceptions.

That said, although I haven't seen it yet and am willing to be persuaded, I am currently planning to have major problems with Quentin Tarantino's upcoming (in theaters Friday) revisionist Jews-versus-Nazis WWII adventure epic Inglourious Basterds [title spelling changed since the poster, obviously].

I should mention, at this point, that this is NOT because I'm one of those Leon Wieseltier-esque soreheads who think that no movie (hell, no art form including literature) can deal with the enormity of The Holcaust (although I think we can all agree that last year's The Boy in the Striped Pajamas was deeply offensive on about a zillion levels and that Roberto Benigni deserved to be slapped smartly upside the head in 1997 for trying to convince us that Life is Beautiful).

And no, it's not even particularly because, having seen the most recent IB trailer (and if Tarantino's recent interviews are to believed), the film seems to have been conceived as an unholy shtup between The Dirty Dozen, Hogan's Heroes, To Be or Not to Be and the scene in Indiana Jones and the Last Crusade where Harrison Ford looks around and says "Nazis -- I hate those guys."

No, my beef with Inglorious Basterds going in is actually a lot simpler, and can be summed up by the image (from the aforementioned trailer) seen below.

Yes, that's Mike Myers -- fresh from the triumph that was The Love Guru -- essaying a straight part as a British General. (Here's a link to the trailer itself, the better to enjoy, if that's the word, Myers' modified Austin Powers accent).

Which leads me to a question, and then I'm outta here. To wit:

Mike Myers as a British General -- Most Unconvincing Stunt Casting Since an Out of Drag Tyler Perry as a Federation Big Shot in Star Trek or merely a Sure Sign That The Rapture is Due Any Minute?

Tags: Quentin Tarantino, Inglourious Basterds, The Boy in the Striped Pajamas, Leon Wieseltier, Life is Beautiful, The Dirty Dozen, Hogan's Heroes, To Be or Not to Be, Harrison Ford, Mike Myers
Print