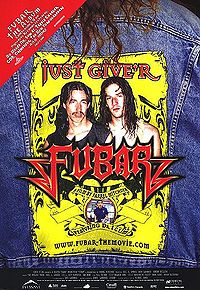 If you've been following my little scribblings here for any length of time, you know, or at least I hope you do, that on most days I try to write something perceptive or funny about a film I've actually seen. And I think I can say, perhaps not immodestly, that on most days I succeed.

Today, however, is a different story altogether. Sorry.

That being the case, let me simply note at this juncture that even though I've never sat through FUBAR -- the mockumentary cult film from 2002 about a couple of dim bulb '80s Canadian metalheads -- I still think it's absolutely great.

Why? Because it gives me an excuse to post an utterly fabulous music video made for the film, that's why.

Ladies and gentlemen, please enjoy The New Pornographers, featuring the divine (and I mean that literally) Neko Case singing lead, in a note perfect cover of an actual world famous in Canada 1982 hit, the fiendishly catchy (in a sort of Rick Springfield-ish way) "Your Daddy Don't Know."

In case you were wondering, the song was originally recorded by the actually world famous in Canada New Wave hair band Toronto.

And in case you're wondering just how note perfect Neko and the rest of NPs got it, here's the original in all its teased-out spandex glory.

Coming tomorrow: Despite the fact that I've never seen a single frame of the 1983 generic teen comedy One Crazy Summer, I declare it an imperishable masterpiece solely on the basis of co-star Demi Moore's totally bitchen vocal on "Don't Look Back"!