Thursday All You Can Eat Seafood Buffet! 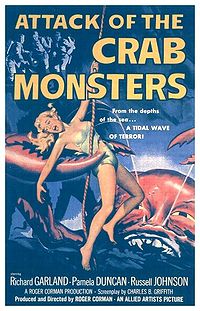 Readers who were with us yesterday will perhaps recall that in our less than enthusiastic review of the new DVD version of How to Lose a Guy in 10 Days we suggested, perhaps unkindly, that both star Matthew McConaughey and Madonna (who's not in the movie) look like the sort of people who'd give you the crabs.

This prompted an angry response in the comments section from, you guessed it, The Crabs, who wrote: "Hey -- that crack about McConaughey and Madonna was way out of line, buddy!"

Well, on further reflection I've decided they have a point, so by way of making amends, I thought I'd post a video clip of the opening sequence from one of the greatest crab movies of all time, i.e. Roger Corman's 1957 sci-fi classic Attack of the Crab Monsters. Written by genius Little Shop of Horrors scribe Charles B.Griffith. Starring Gilligan's Island Professor Russell Johnson. And with cinematography by Academy Award-winning camera guy Floyd Crosby, father of David Crosby, who's in some famous rock band whose name now escapes me.

Incidentally, the crabs in the movie are telepathic. Thought you'd like to know.

Alas, the film isn't on DVD at the moment, but there's more over at YouTube if you're really interested (or merely crab-centric).

Coming next Thursday: All You Can Eat Seafood Buffet Part II, with clips of scungilli (the octopus in F/X genius Ray Harryhausen's 1953 It Came From Beneath the Sea) and calamari (the squid in Disney's 1954 classic 20, 000 Leagues Under the Sea)!

Tags: How to Lose a Guy in 10 Days, Matthew McConaughey, Madonna, Roger Corman, Little Shop of Horrors, Ray Harryhausen, It Came From Beneath the Sea
Print