Weekend Cinema Listomania (Special There Are Places I Remember Edition) 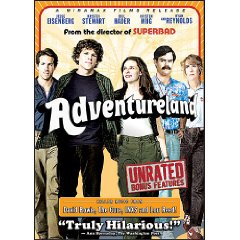 Video Event of the Week: Is it Sony's new DVD of indie pioneer John Cassavetes' mid-life crisis epic Husbands, with Peter Falk and Ben Gazzara? Could the Universal Blu-ray of Michael Clayton auteur Tony Gilroy's hilarious Duplicity, with Clive Owen and Julia Roberts, conceivably make the cut? Or -- and I'm just throwing this out as a theoretical -- might Overture's new edition of Sunshine Cleaning, the Amy Adams/Emily Blunt black comedy about sisters who mop up (literally) at crime scenes, in fact be The One?

All worthy to be sure, especially Duplicity, which despite its failure to find much of an audience in its theatrical run remains one of the very best films of the year. But for my money, it's got to be the new Miramax DVD (with unrated bonuses) of Superbad director Greg Mottola's autobiographical 80s coming of age comedy Adventureland.

I know what you're thinking -- horny teens, dick jokes, pot smoking, a bad Top 40 and college rock soundtrack and you've seen it all before. Well, true enough as far as it goes, but Adventureland is actually way better than that, thanks to sharp writing -- scripter Mottola, perhaps recalling Jean Renoir's famous dictum that "even villains have reasons" has provided convincing backstories for even the least sympathetic of the characters -- and a couple of sensational performances. Jesse Eisenberg, as the sweetly virginal (and too intellectual for his own good) college grad stuck in the worst summer job of his life (filmed at a real preserved-in-amber amusement park outside Pittsburgh) hits just the right note of neurotic self-effacement throughout; if you've ever been 21 and a little alienated, you'll recognize him immediately. But the real surprises here are Twilight ingenue Kristen Stewart, who at first glance appears to be the traditional Manic Pixie Dream Girl genre character but who turns out to be quite a bit more complicated and interesting, and Ryan Reynolds, playing against his image as a slightly older golden boy lothario who ultimately isn't as cool or nice as you (or he) might think. And there's lots, lots more to admire about the film, in particular SNL regulars Bill Hader and Kristen Wiig, who are hilarious as the hopelessly out of touch married couple who own the park (although their characters aren't quite as fully realized as some of the others), and a fireworks-lit Fourth-of-July make-out scene set to Crowded House''s sublime "Don't Dream It's Over" that's so in-the-gutter-but-looking-at-the-stars romantic you'd need a heart of stone not to melt on some level.

The disc itself looks and sounds great; the transfer is sharp as the proverbial tack and the 5.1 Surround is nicely atmospheric (the 80s oldies, including a certain perhaps overfamiliar Violent Femmes song, actually work fine in context). The bonuses include a decent enough making-of documentary, the usual moderately amusing deleted scenes, and an interesting running audio commentary by Mottola and Eisenberg; the latter turns out to be pretty much as charmingly honest and hyper as his character.

Bottom line: You can order Adventureland -- and you'd be a complete and total schween if you didn't as far as I'm concerned -- here. 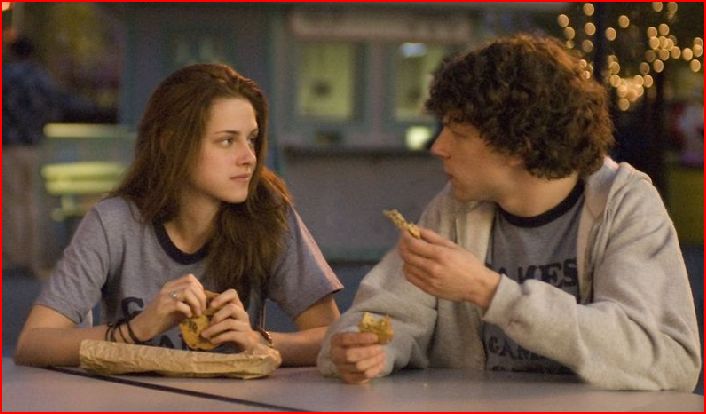 Okay, that out of the way, and because things threaten to be pretty quiet around these parts for a couple of days, we move inexorably to a fun and obviously relevant new little project for us all to contemplate --

Best or Worst Film Based On or Inspired By Events In Its Writer or Director's Actual Real Life!!!

And my totally top of my head Top Five is --

Two out of work actors in London in the summer of Woodstock deal with lunatic drug dealers, an eccentric gay uncle, professional jealousy and the fact that the 60s are curdling into the 70s. The self-absorbed but charming Withnail, played with hilarious neurotic intensity by the great Richard E. Grant, was writer/director Robinson's real life roomate, and if you've seen the film -- which remains the most dead-on evocation of the last days of the counterculture -- you won't be surprised to learn that he drank himself into an early grave.

Woody Allen plays a schlemiehl soda jerk who gets a gig fronting for his blacklisted TV writer friends at the height of the McCarthy Era. Screenwriter Walter Bernstein, director Ritt and co-star Zero Mostel had all been blacklisted themselves, but fortunately for them, four years after the film came out former Screen Actor's Guild president Ronald Reagan declared that there actually hadn't been a blacklist, which made them feel a lot better, I'm sure. Mostel's character, seen here committing suicide, was based on his real life blacklisted actor pal Philip Loeb, who ODd on pills in a hotel room.

Neil Simon revisits his days as a writer on the old Your Show of Shows. I'm not a huge fan of Simon's other autobiographical stuff, which is to say a little Brighton Beach goes an awfully long way with me. But this is absolutely hilarious.

The Maestro's warm-hearted, funny and occasionally surreal tribute to the city of his youth. I haven't seen it in years, but a Google search turned up the fact that pioneering American indie rocker Elliot Murphy has a small part in it, which has increased my already considerable respect for him exponentially.

And the numero uno "In My Life" film of them all, it's not even a contest so let's just cut to the chase here, obviously is --

Writer/director/star Ed Wood's heartfelt plea for tolerance, based on his own experiences as a cross dresser before such things were fashionable. The Citizen Kane of Z-movie transvestism, obviously.