Video Event of the Week: Is it Sony's new double disc sets of 30s classics from the Columbia vaults, Icons of Screwball Comedy, Vols. I and II? Could the Criterion Collection's director approved version of the uber-Goyische Whit Stillman's The Last Days of Disco actually make the cut? Or, against the odds could Disney's Race to Witch Mountain, the kids sci-fi starring The Actor Formerly Known as The Rock, conceivably be The One?

All worthy, to be sure, and I'm definitely going to write about the Stillman (featuring the young Kate Beckinsale -- woo hoo!) next week, but for my money it's got to be New Line's DVD edition of the impeccably waxed eyebrows that are teen heartthrob Zac Efron in 17 Again.

Which is not to say this is some kind of imperishable cinematic art. It's a genre film, obviously, but in a genre I hadn't really recognized as such until just now -- A (Second?) Chance to Learn an Important Life Lesson via Supernatural Deus Ex Machina/Body Switch film, in the great tradition of both Freaky Fridays, Heaven Can Wait and Tom Hanks in Big. Not to mention some related left field flicks like C. Thomas Howell in Soul Man and -- my personal favorite -- the 1985 Just One of the Boys. You may not recall that one, but it featured former Springsteen girlfriend Joyce Hyser as a college journalist who poses as a boy (to write a story on high school mores) and gets away with it despite having, as they say, a balcony you could do Shakespeare off of.

In any case, the set-up of 17 Again (in case the title isn't clear enough) is simple: An 80s teen with a bright future (Efron) gets trapped into a loveless marriage and grows up to be a disillusioned prematurely middle-aged burnout (Matthew Perry). Fortunately(?) for him, on a trip to his old high school, he encounters a magic janitor (Brian Doyle-Murray) who transforms him back into a teenager, thus giving him the chance to re-live his life and get it all right this time. Wacky complications ensue, the aforementioned valuable lessons are learned, and blah blah blah.

Okay, as I said, none of it is terribly original, but I'd be lying if I said the formula doesn't work and there weren't laughs to be had. As for Efron, he's a reasonably deft comedian and let's just say that the jury's still out on whether he'll be a convincing adult leading man down the road. As for the DVD, New Line's transfer is sharp as a tack; you have the choice of watching the thing in either widescreen or full-screen -- not sure why Efron's demographic would need that option, but whatever -- and the surround mix is surprisingly effective (for those who care).

I should also add that I am upping my assessment of this a couple of points for three reasons. 1) Matthew Perry as the adult Efron is the most hilariously unbelievable casting since George Lucas tried to convince us that Ewan McGregor was going to grow up to be Sir Alec Guiness; 2) the lovely Melora Hardin, who plays the newly pubescent Efron's high school principal, starred in one of the two competing Lambada movies back in 1990 and is thus deserving of respect from mere mortals; and 3) 17 Again's auteur Burr Steers has the coolest nom de cinema in history, with the possible exception of Savage Steve Holland.

Best or Worst Screen Performance By a Teen Idol of Any Age!!!

And just to clarify, this can include performances by said teen idol when they're long past teen status.

The usually vapid heartthrob as a drifter (who may or may not be a serial killer) who gets involved with heiress Joey Heatherton, a groovy 60s chick he claims was his lover in a previous life. An interestingly lurid shocker, somewhat envelope-pushing for its day, with a surprisingly credible Donahue. And yes, the director is THAT William Conrad.

Director Hawks throws the teenaged Nelson into a classic western set-up in the company of a heavyweight bunch of canny scene-stealers (Walter Brennan, Dean Martin) and iconic pros (John Wayne). And guess what -- the kid more than holds his own.

Perhaps the most artful of the Swinging London flicks (and that includes A Hard Day's Night) and certainly the most downbeat. Fortunately, the guys in the DC5 (leader Clark in particular) manage just the right note of slightly bemused existential angst. And yes, the director is THAT John Boorman (making his feature debut).

One of the great ensemble pieces of the 90s, obviously, and I think we can all agree that former Funky Bunch hottie and underwear model Marky Mark gives a, you should pardon the expression, standout performance as a guy with an extremely large personality.

And the numero uno star turn by an idol of idle youth, it's not even remotely a contest so just STFU for heaven's sakes, obviously is -- 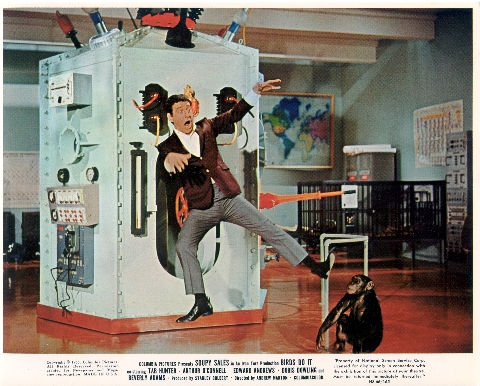 Soupy was 40 when he made this movie, but just the year before, with his great "The Mouse" in the Top Ten, he had headlined an Easter Week set of rock shows at New York's Paramount Theater and garnered Beatlemania level teen screams. Granted, the movie itself isn't very good -- typical period nonense about a NASA janitor who inadvertently becomes part of an experiment that gives him the ability to fly and makes him "the most attractive man" on earth. But hey -- Soupy is Soupy.

Alright then -- what would your choices be?