How Bad Could It Be? (An Occasional Series): The Ghost and Mr. Chicken 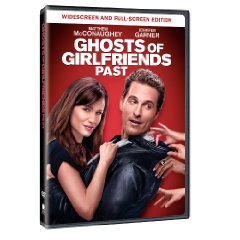 Just finished watching the forthcoming New Line DVD of Ghosts of Girlfriends Past, the 2009 romantic comedy starring Matthew McConaughey and Jennifer Garner. As I mentioned in a previous installment, I'm not, to put it charitably, a fan of McConaughey, but given that I've had a thing, as they say, for Garner since Alias and since my personal hero, the wonderful tough guy actor Robert Forster, is third billed I figured it might be worth a look.

The plot -- lifted from A Christmas Carol, obviously:

Trendy photographer/womanizer Connor Mead (McConaughey) takes a break from his playboy lifestyle to attend the wedding of his brother (Breckin Meyer), where he (almost literally) bumps into Jenny Perotti (Garner), the only girl he ever really loved. After giving a drunken anti-marriage speech at the rehearsal dinner, he's met in the mens room by the ghost of his uncle Wayne (Michael Douglas), a Hefner-esque cad who taught him everything he knows. Uncle tells him that he's about to be visited by three ghosts who will lead him through his romantic past, present, and future. Said ghosts appear, wacky complications ensue, and if you have to ask if Connor will get over himself and earn the love of a good woman, I can only assume you've never actually seen a Hollywood movie.

Okay, cutting to the chase, the answer to our earlier question is "really fricking awful," starting with McConaughey, who looks (as always) like the kind of guy who'd give a girl the crabs, and whose character is such an utterly unlikeable pig idiot that there's simply no way you could care if he's ultimately redeemed. Garner (also as always) is a radiant force of nature throughout, and director Mark Waters gives the proceedings a sort of burnished look that's surprisingly sophisticated, but the whole thing is really painfully offensive and unfunny, and the aforementioned Forster is wasted in a glorified cameo. Plus: Don't even get me started on the truly creepy scene where McConaughey's sleazebag hits on the mother of the bride, played by the long suffering and still gorgeous Anne Archer.

On the other hand, as a reader commented last time out -- a male critic doesn't like a chick flick, what a surprise. So here's the trailer; feel free to make up your own mind.

In any case, you can, if you're so moved, pre-order Ghosts of Girlfriends Past here.