Kids Movies I Missed as a Kid: An Occasional Series 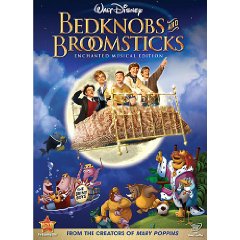 True confession: It's a source of some embarassment to me that there are myriad childhood touchstones for my younger friends that I'm totally clueless about. I have a pretty good excuse for that, of course, because as some of you doubtless know I'm incredibly old (older than both God and my parents, actually). But to give you an example of just how out of touch I am with a lot of beloved and widely shared experiences from most peoples pre-teen years in the late 20th century, I have only just this week learned that Sesame Street's Bert and Ernie are gay. Also -- the first time I saw Mr. Rogers Neighborhood on PBS, I had no idea it was a kids show and in fact thought the reason the guy was talking so slowly was because he was stoned.

Which leads me, of course, to the just released Enchanted Musical Edition DVD of Disney's Bedknobs and Broomsticks, a 1971 kids classic heretofore unseen by moi which I thought might be worth a look both on its own merits and for the reason limned above.

The Informant! -- A gratuitous exclamation point, Matt Damon with a cool fake nose, a hilarious and devastating critque of capitalism run amok, AND sly cameos by both of the Smothers Brothers? Movie of the year, as far as I'm concerned.

But I digress. We were speaking of Bedknobs and Broomsticks, which is of course a sort of followup to Mary Poppins (same director, same songwriting team, same Brit milieu, same mix of animation and live action) and which turns out to be a thoroughly charming if somewhat oddball entertainment. The basic premise is proto-Harry Potter; set during World War II, it's the story of a bunch of kids orphaned in The Blitz who get sent off to the country to live with local eccentric Angela Lansbury, an apprentice and somewhat inept witch complete with flying broomstick and anthropomorphic cat. In betwen songs (by brothers Richard and Robert Sherman) the kids learn all sorts of lessons about the importance of believing yadda yadda yadda, and there's a lot of cool special effects (Lansbury's first flying scene will look VERY familiar to anybody who knows what the word Hogwarts means) and cartoon animals to paper over the dull spots.

The new DVD version, which looks like it was shot yesterday, has been restored and remastered to a fare-thee-well, with eye-popping color and half an hour's worth of songs that were cut from the original theatrical version. There are also some interesting bonuses, including a documentary with the Shermans discussing their involvement with the project (not, if memory serves, footage included in the recent film about the brothers) and a look at how the special effects were done hosted by the alarmingly perky Jennifer Stone, an actress from some current Disney kids TV show I am also unaware of. The most interesting of them is the reconstructed version of "A Step in the Right Direction," one of the cut songs whose film elements did not survive; here's a brief clip to give you an idea of how it was put back together with the use of production stills.

In any case, you can -- and I think should -- order the Enchanted Musical Edition DVD of Bedknobs and Broomsticks over here.

Coming tomorrow: Schoolhouse Rock -- what the hell is that?