Sure Signs of The End Times: An Occasional Series 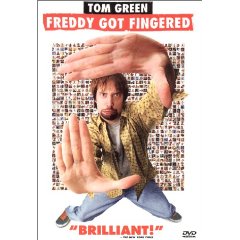 You know, a new decade is almost upon us, and with it comes an inevitable question: What was the worst, most soul-destroying thing I saw at the movies since the dawn of the 21st Century?

But upon sober reflection, I don't think it's even a contest. Ladies and gentlemen, more in sorrow than in anger, behold the trailer for the 2001 Freddy Got Fingered, written and directed by MTV irritant Tom Green, who also stars. A regular Orson Welles, right? Wrong.

As I said in my review at the time:

A pre-release screening [I attended] seemed to be populated by two demographics: People who laughed uproariously every time Green fondled the penis of a large animal, and people who headed for the theater doors with a speed usually associated with pursuit by the Hounds of Hell...Amazingly enough, there is a plot; it involves an aspiring cartoonist named Gord Brody (Green) laboring mightily to convince his blustering father (Rip Torn) that he's not the slacker moron everyone - including the audience - quite correctly assumes him to be. The obligatory subplots include one involving Gord's handicapped girlfriend Betty (Marisa Coughlan), a rocket scientist (really!) obsessed with fellating her unrealistically unwilling swain, and another revolving around Gord's younger brother, the titular Freddy (American Pie's Eddie Kaye Thomas) and false charges of sexual abuse (this is where the fingering part comes in. Really now, could anything be more hilarious?) To be fair, this probably isn't the worst gross-out comedy ever made (it's nowhere as misogynistic as, say, Tomcats). But it's hard to ignore the strain of gratuitous cruelty that runs through it (a running gag features a little kid getting the crap whacked out of him) and Green deserves major demerits for restaging the classic Buster Keaton falling house gag without its visual punchline (you don't see Green standing, unhurt, amidst the rubble). Hey - maybe he isn't just pretending to be dumb.

And while I usually don't see eye to eye with Roger Ebert -- who I will stipulate deserves respect from mere mortals like myself for having penned the screenplay to Beyond the Valley of the Dolls -- I think his take (as seen below) on Freddy is pretty much on the money. The fact that the film got away with an R rating really IS proof that the MPAA Ratings Board is morally bankrupt.

If you're still curious about the film -- and if you are I pray for you -- you can order the DVD here.

Incidentally, I was wondering about the mini-blurb ("Brilliant!" -- The New York Times) on the DVD box. Had to be a joke, no? Turns out, to my considerable amazement, that the Times' estimable A.O. Scott more or less totally disagreed with Roger and me in his review. Even after all these years, words fail me.

Tags: Mark Herman, The Boy in the Striped Pajamas, Freddy Got Fingered, Tom Green, American Pie, Eddie Kaye Thomas, Beyond the Valley of the Dolls
Print