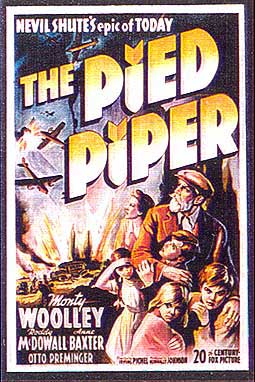 Well, maybe not lost in the London After Midnight or the probably-never-to-be-found missing footage from Greed sense. But I am kind of surprised to find that my favorite Monty Woolley film -- the Best Picture nominated The Pied Piper (1942) -- is at the very least missing in action.

Seriously, this is one of the most entertaining WWII adventures ever. Woolley, playing a variant of himself as always, is wonderful as a crusty kid-phobic Brit, on vacation in Switzerland at the outbreak of the war, who's persuaded to take a friend's two small children (Roddy McDowall and Peggy Ann Garner ) to safety in England. Other kids get attached to Woolley's unlikely samaritan along the way, and the rag-tag group manages to stay one step ahead of the Nazis until a nailbiting big finale when they're captured by German commander Otto Preminger. Ann Baxter plays a French girl (a bit like the one she played in Billy Wilder's great Five Graves to Cairo) who helps Monty and his charges; eventually we discover that her character and Woolley's son, an R.A.F. pilot shot down two months earlier, were lovers. And there's another neat twist at the end when it turns out that Preminger's character has a half-Jewish niece he wants smuggled out of the country.

Here's a clip, including the splendidly menacing Preminger, to give you an idea.

The bottom line is that it's an all but flawless mix of sentimental hokum and suspense, with lots of great performances (Woolley was nominated, deservedly, for Best Actor) and taut direction by underrated auteur Irving Pichel, who gives the whole thing a sort of wartime Gothic feel.

Unfortunately, as I mentioned up top, The Pied Piper is more or less MIA at the moment. There's no official or unofficial DVD available that I can find, and to my surprise, the film -- made by 20th Century Fox -- does not appear anywhere over at the Fox Movie Channel website. I'll keep my eyes and ears open, though, and if TPP shows up on the tube anytime soon I'll advise you to pounce. 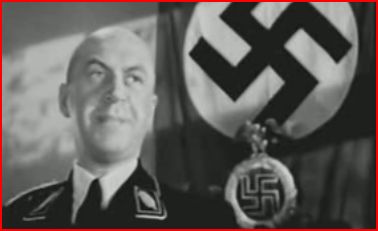