Scenes From an Unwritten Screenplay: The Mystery of Victor Noir 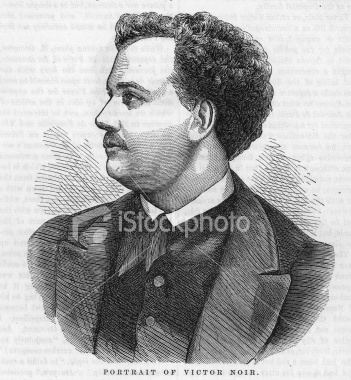 Here in Paris -- have I mentioned that I've been vacationing in the land of the Ignoble Frog for the last several days? -- it seems a movie-worthy story is where you find it. Case in point: This weekend I spent the better part of a rainy Saturday wandering around the historic Pere-LaChaise cemetery, final resting place to (among others) Fredric Chopin, Gertrude Stein, Abelard and Heloise and bozoid Doors lead singer Jim Morrison. An interesting afternoon, to say the least, especially when I chanced across the utterly modest and unassuming joint grave of French film icons Yves Montand and Simone Signoret.

In any case, I was getting ready to leave when I practically tripped over a gravestone of a personage previously unknown to me. It was a lifesize bronze relief of a nattily dressed young man, of the mid-19th century by the look of his clothes, lying dead on his back, with top hat in hand and the top button of his trousers unfastened. There were fresh flowers stuffed into the hat, but what was particularly odd was that the area of his crotch was totally discolored, apparently from excessive wear. It was as if over the years -- according to the gravestone, the date of his death was 1870 -- somebody had been rubbing it obsessively. This struck me, as you can imagine, as just the damndest thing. As did his name...Victor Noir. Wow, I thought -- a dead Frenchy with an entire film genre named after him. Who was this guy? And why were people rubbing his bronze genital area? 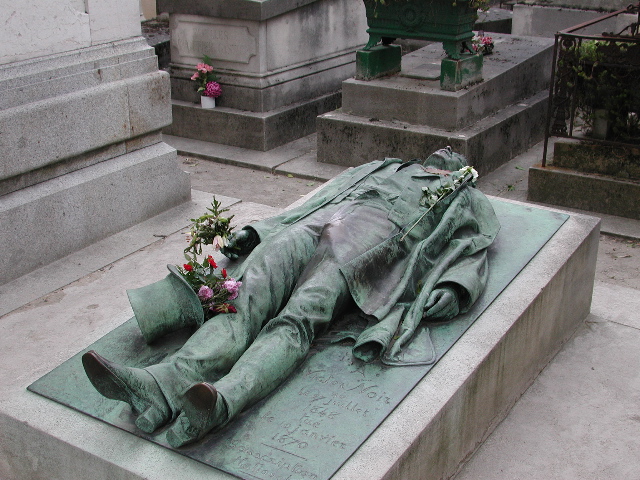 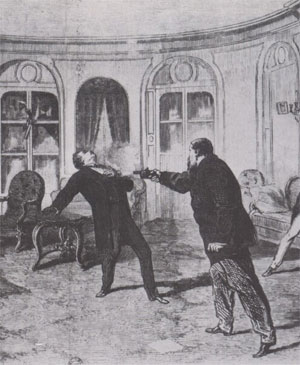 The answer to the first question was easily found via Le Google. Turns out that Noir wasn't his real name (no surprise there); born Yvan Salmon in 1848, the son of a Jewish cobbler who converted to Catholicism, he adopted the nom de plume (after his mother's maiden name) when he set off for Paris to become a muckraking journalist for La Marseillaise. Once there, the circumstances of his death turned out to be uniquely cinematic. Seems there was a political feud between the editor of a rival Corsican newspaper and Pierre Bonaparte, great-nephew of the famous Emperor. Noir and a bud were sent to Bonaparte's house as seconds, to arrange the details of a duel, but the latter was so insulted to have been approached by mere "menials" (his phrase, apparently) that he slapped the hapless 22-year-old in the face, pulled out a pistol and shot him on the spot. Charged with murder, Bonaparte insisted he'd been slapped first and had fired in self-defense, and was ultimately acquitted. A public outcry followed, and ultimately 100,000 Parisiens turned out for Noir's funeral procession.

The answer to the second question is more problematic. Also according to Le Google, the reason why Noir's bronze crotch is well worn is that over the years a legend has developed, specifically that if a woman puts flowers in the statue's hat, kisses Noir's figure on the lips and finally rubs the groinal area then this will, er, enhance fertility, ensure a blissful sex life, or, in some versions, guarantee a husband within the year. Why this story developed, however, is ultimately mysterious, given that there is absolutely no record I can find suggesting that Noir was particularly a ladies man or endowed in any out of the ordinary way in that particular area. It may be that the story started for no other reason than that sculptor Jules Dalou, who did the gravestone likeness, thought it might be kind of funny to cast Noir with a suggestive bulge in his pantaloons.

In any case, the legend persists to this day. As recently as 2000, the Pere-LaChaise powers that be put a fence around the grave to keep sex-crazed filles from further defiling it, but another public outcry convinced them to take it down in 2004. As of this writing, the deterioration of Noir's statue continues unimpeded.

Like I said, a movie-worthy story, sans doute. I'm thinking Todd Haynes to direct, Leo DiCaprio as Victor, and Megan Fox , in a dual role, as the Countess who put the original lump in Noir's shorts and (in a framing story) as the contemporary babe whose fingers linger on the bronze. If anybody at a studio is reading this, please contact my rep Morty Lachman at the Gonif Agency and we'll talk.