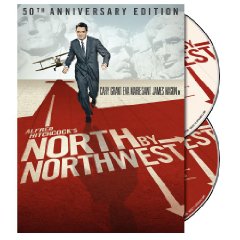 Video Event of the Week: Is it the Miramax DVD of Cheri, Stephen Frears' oddly overlooked 2009 adaptation of two Colette stories, starring the still toothsome Michele Pfeiffer? Could BBC/Warner's Fawlty Towers: The Complete Collection, featuring remastered versions of all twelve episodes of John Cleese's classic britcom conceivably make the grade? Or against every decent impulse known to humanity is it even remotely possible that Paramount's Blu-ray of Michael Bay's not at all like Jean-Luc Godard GM-Cars-From-Outer-Space epic Transformers: Revenge of the Fallen, might be The One?

All worthy, to be sure, except for that Transformers crap (its run time is a breathless two and a half hours, but it only FEELS longer than Berlin Alexanderplatz), but for my money it's got to be Warner Home Video's absolutely smashing two disc 50th anniversary edition reissue/refurbish of Alfred Hitchcock's most purely entertaining film -- North By Northwest.

NBNW is obviously so good on so many levels, one almost doesn't know where to begin. It's a great romantic thriller (the chemistry between Eva Marie Saint's icy blonde temptress and Cary Grant's proto-swinging bachelor is beyond palpable), it's a great Cold War thriller (the scene where the CIA folks headed by Leo G. Carroll explain how Grant's poor schnook got mistaken for a spy marked for death is the neatest metaphor for the era's moral ambiguities you'll ever see on screen) and it's a great piece of pop surrealism (the crop-dusting scene or the Dali-esque chase over Teddy Roosevelt's nose on Mt. Rushmore). Plus it's got cracklng dialogue (courtesy of screenwriter Ernest Lehman), fantastic supporting performances (James Mason and Martin Landau are truly memorable villains) and then of course, there's that amazing Bernard Herrman score; as with all the films Hitchcock and Herrman collaborated on, you're getting two geniuses for the price of one.

Here's Hitchcock himself giving a guided tour of the film (from a trailer included on the new set).

WHV's package begins with a brand new restoration from the original film elements, and it looks pristine; Hermann's score, in 5.1 Surround, is also utterly immersive. Bonuses on disc two include a really good (from 2000) making-of doc narrated by Saint; there's also a slightly fluffier appreciation of the film featuring comments by Pan's Labyrinth director Guillermo del Toro and World's Looniest Pop Culture Critic Camille Paglia. The latter is slightly less over-caffeinated than usual, but she makes a couple of interesting points about Hitchcock's visual sense having something to do with having cut his directorial teeth in silent films, a point reinforced on disc one, where you can watch the picture, sans dialogue and sound effects, with only Herrman's music as accompaniment. There's also a running commentary by Lehman, who's obviously a little frail, although the glee with which he greets his name in the fabulous Saul Bass opening credits is quite infectious.

In any case, you can -- and obviously should, immediately -- pre-order the 50th anniversary edition of North By Northwest here. 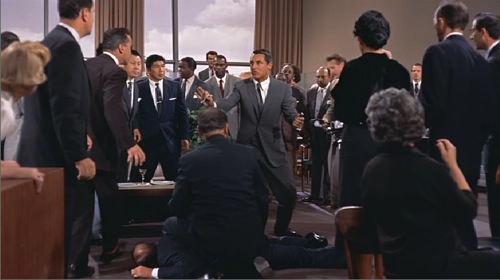 Suavest, Most Debonair and/or Dashing Performance By an Actor in a Lead or Supporting Role!!!

5. Douglas Fairbanks in The Prisoner of Zenda (James Cromwell, 1937)

I'm sorry, Ronald Colman's great as the hero in this, but Fairbanks as villainous womanizer Rupert of Hentzau is the one you secretly want to be.

I've always preferred Bowie the actor to Bowie the pretentious rock and roll song and dance man, but here he gets to be both and he's a knockout. Seriously -- is he fricking dapper or what?

The scene where he peels off the wetsuit and snorkel to reveal the impeccably tailored and pressed tuxedo beneath is still one of the most amazing things I've ever seen on a big screen.

Granted, he's doing a parody of William Powell as the Thin Man, but he's so damn stylishly sophisticated in the part that it I couldn't resist.

And the numero uno most cooly elegant performance by an actor in a dinner jacket or something similar is without a doubt...

For obvious reasons, not the least of which is that I'm actually in Paris right now, and getting ready to take a tour of the locations the movie was shot on. Stay tuned next week for a report.