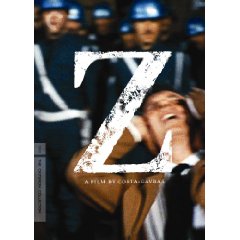 Video Event of the Week: Could Universal's DVD and Blu-ray versions of Drag Me to Hell, a return to his horror flick roots from Spiderman director Sam Raimi, possibly qualify? Might Palm Pictures Blu-ray upgrade of Stop Making Sense, the 1984 Jonathan Demme/Talking Heads concert film, conceivably make the grade? Or against every recognized standard of civilized human behavior, could Universal's discs of Land of the Lost, the Will Ferrell update of the old Sid and Marty Krofft kids show, by any stretch of the imagination be The One?

All worthy, to be sure, although Will Ferrell can suck it, but for my money it's got to be the Criterion Collection's utterly fab new version of Costa-Gavras's Academy Award-winning 1969 political thriller Z.

Usually referred to as "loosely based" on the real-life 1963 assassination of a Greek left-wing activist (although the film's opening titles make it quite clear that the quotation marks are superfluous), Z is the film that put Costa-Gavras on the international map, and seeing it just now -- for me, for the first time in forty years -- was a bit of an eye opener, kind of like revisiting The Manchurian Candidate again when it was finally exhumed in the 80s. Which is to say, both stylistically and thematically, it it seems quite minty fresh (basically, it's the first real paranoid conspiracy action movie) and its relevance to life here in these United States at the moment more than a tad unsettling.

I don't want to oversell it; as well made and suspenseful as it is, it's still a piece of pulp agit-prop at heart, with all the subtlety that implies, and there are parts of it that are just over-heated enough that you can see how its auteur could years later wind up making the utterly imbecilic Betrayed, in which undercover FBI agent Debra Winger marries farmer Tom Berenger without ever realizing that he's a murderous white supremacist Klan bigshot. But it remains a jolting piece of work, with terrific performances (Yves Montand brings a wonderful rumpled macho charm to the role of the marked for death politico) and an unflinching eye for casual violence, and as I said, the cautionary parallels with recent American events are hard to dismiss. If you're expecting a 60s period piece, a la The Strawberry Statement, you're going to be disappointed.

Here's the reissue trailer to give you an idea.

Criterion's cleaned-up video transfer, supervised by original cinematographer Raoul Coutard, looks great, by which I mean it does justice to the film's odd cross between pseudo-documentary realism and a sort of back-lot look familiar from Universal Studios tv shows of the period (there are moments here when to be honest I thought I was watching an old episode of The Name of the Game). Typically interesting Criterion bonuses include an audio commentary by film historian Peter Cowie, the original trailer, new interviews with Costa-Gavras and Coutard, plus archival interviews with the director, stars Montand, Irene Papas, and Jean-Louis Trintignant, as well as Vassilis Vassilikos, author of the book Z is based on. The booklet with the package also includes a surprisingly cogent essay by Armond White, normally America's looniest film critic; I can only assume he has a pal at Criterion and is thus on his best behavior when they throw him a gig.

In any case, you can -- and obviously should -- pre-order Z over here. 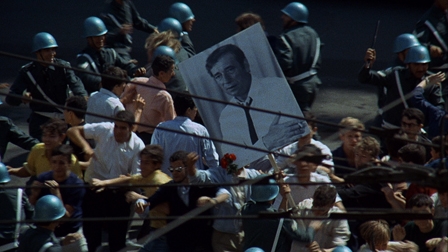 Best or Worst Film With Either a Single Letter or Initials In Its Title!!!

An obvious choice, I'll grant you, but inarguable.

Crazy lounge pianist Michael Moriarity carries out a revenge killing spree with the help of a giant flying lizard that hides in the top of the Chrysler Building. My favorite of the several equally wacky films director Cohen did with the convincingly unhinged Moriarity.

A thoroughly unpleasant marriage-coming-apart-at-the-seams flick, but there's hot girl on girl action between stars Elizabeth Taylor and Susannah York, so obviously I'm in favor of it.

The plot: "W.W. Bright (Burt Reynolds) is an easy going crook who robs gas stations through the drive-up windows. The Dixie Dancekings are a country music band trying to get discovered. W.W. steals their car with them in it to rob a bank. The group agrees to help out in order to finance the band. The band and W.W. are chased by bible beating lawman Deacon John Wesley Gore (Art Carney). W.W. helps them achieve success after getting to know and like them."

And the numero uno memorably monogrammed film quite obviously is..

I know, I know, it was made for TV, and I don't care. Five words: Jane Badler eating a mouse. (Incidentally, I'm not at all ashamed to admit that I am eagerly awaiting the remake of the above, which is premiering on the tube on November 3.)