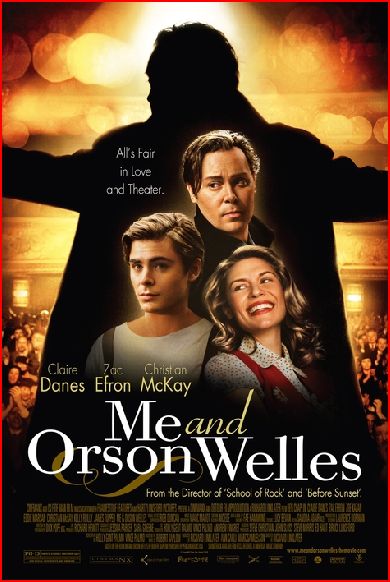 Actually, apologies everybody -- having just returned from a week's sojourn in the land of the Ignoble Frog, I'm frankly too laden with heavy sauces to get a standard WCL together. As a result, Listomania progamming -- hint: involving the fabulous new Criterion edition of Wim Wenders' Wings of Desire -- will resume next Friday.

In the meantime, though, I'd be remiss if I didn't mention a fun event for us all with a certain relevance to tomorrow's holiday.

I'm referring, more specifically, to tonight's streaming broadcast of the original Halloween shocker to end all Halloween shockers -- the Orson Welles radio dramatization of H.G. Wells' War of the Worlds that scared the bejeezus out of unsuspecting Americans exactly 71 years ago this weekend.

(One of those Americans, I might add, was in fact my dad, who heard it in his dormroom at Texas A&M. Although years later told me he was too busy cramming for an exam to really worry about an extra-terrestrial invasion as long as it was happening in New Jersey.)

In any case, the broadcast is a promo tie-in with the forthcoming Me and Orson Welles -- in which High School Musical I-III irritant Zac Efron, fresh from the triumph that was 17 Again, attempts to show he can, uh, you know, act or something -- which will be unleashed at theaters all across our noble Republic on November 25.

Actually, the movie itself sounds pretty cool, if truth be told. Essentially, it's a reworking of My Favorite Year -- the story of a green kid who comes to NYC and gets a chance to work with his artistic idol, only in this case the idol is Boy Genius Welles (eerily impersonated by Christian McKay) rather than a pioneering TV comic based on Sid Caesar. And director Richard Linklater -- auteur of Slacker, School of Rock, and A Scanner Darkly --- is rarely less than interesting.

Here's the trailer, to give you an idea.

As far as the original Welles War of the Worlds broadcast goes, if you've never heard it you may be surprised on a number of levels. For one thing, it's a really terrific show, which is to say a wonderfully imaginative use of the radio medium. For another, with contemporary ears it's almost impossible to imagine that people actually thought it was a real newscast -- it has dramatic music and a voice-over narration, for heaven's sake. On the other hand, we all fell for that idiotic balloon boy hoax last week, so we probably shouldn't be smug about our current level of media savvy.

Incidentally, IMHO, the greatest single performance Welles ever gave was the morning-after press conference in which he apologized, with breathtaking insincerity, for causing the whole fuss. Alas, only this brief snippet is currently available on YouTube, but here it is; we should note for the record that the great man was probably speeding his brains out at the time, which adds several layers of irony.

In any event, you can -- and very definitely should -- listen to tonight's rebroadcast of the show over here; the chills begin promptly at 8:00 pm, (EST).

And remember -- keep watching the skies!