I Lost It At the Movies 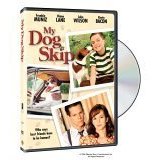 Dunno if you saw the Sunday Times magazine this week, but A.O. Scott, who for my money is among the most perceptive and entertaining film critics around, had a particularly droll piece on the most important and influential movies of the decade. I agreed with some of his choices (Influential: Zodiac, The 40 Year Old Virgin) and raised an eyebrow at some others (Important: Million Dollar Baby, Where the Wild Things Are), but overall it's a very smart little essay and you should check it out when you get a chance.

I should add that this part, in particular, caught my attention immediately.

Many years ago, in an age of chaos and confusion, in a world where time was money and pleasure was work, I saw a movie that changed my life forever. It was called My Dog Skip.

Perhaps you remember it. To be perfectly honest, I don't. There was a dog named Skip, of course (a Jack Russell terrier with a taste for bologna) - who lived in Mississippi in some bygone, innocent era before the present age of chaos and confusion, in a world where . . . - but never mind. Kevin Bacon was in the movie and also Luke Wilson and the kid from Malcolm in the Middle. I recollect this stuff only because I looked back at an old newspaper review, the first I ever wrote as a film critic for The New York Times.

Dude sounds like he's been reading my mail. Which is to say, and you'll have to take this on faith, that I've reached the point where I'm noticing movies in the cable listings that I'm positive that I saw, and am reasonably sure I reviewed, and yet I can remember absolutely nothing about them. Of course, whether this is a sign of incipient senility or a comment on the formulaic forgettableness of too many contemporary commercial films is something that, as they say in the fake newsreel in Citizen Kane, "No man can say."

In any case, I suspect I've seen My Dog Skip too, although my memory of it is as hazy as Scott's. So, for the two of us, here's the trailer to jog, gently one hopes, both our memories.

Forgettable? YOU make the call!

In the meantime, you can -- but only if you must -- order a DVD of the damn thing here.