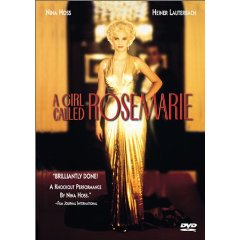 Sex. Murder. Money. More sex. You'd think a film reeking of all four of the preceeding would be a guaranteed crowd pleaser. But for some reason, the 1996 A Girl Called Rosemarie,
the smashing first (and as yet only) directorial effort from veteran producer Bernd Eichinger -- based on the most famous unsolved crime in postwar German history -- never connected with anybody but me, or so it seems.

The plot (as I summarized it in my review at the time):

When we first see Rosemarie Nitribitt (Nina Hoss) she's just another reform school strumpet, albeit one with American movie star looks. But Rosemarie has her eyes on the prize, in the form of rich industrialist Hartog (Heiner Lauterback); she becomes a comfortably kept woman, but Hartog won't dump his upper crust fiancé. Enter French businessman Fribert (the wonderfully oily Matthieu Carriere), with a proposition: He'll subsidize Rosemarie's life of luxury if she'll seduce Hartog's friends and business associates (movers and shakers all) and secretly tape their encounters. But when push comes to shove, Rosemarie balks; she refuses to give the tapes to Fribert and tries to blackmail Hartog into marriage (yes, she loves the big galoot, Hollywood style). Next day, she turns up strangled, and nobody busts a gut to find out who dunnit.

This is actually the second German screen version of the story. The 1958 Rosemary, released the year after Nitribitt's death, suggested that all her lovers had a literal hand in her death, a la Murder on the Orient Express. But Eichinger, working from a script cowritten with Uwe Wilhelm, has a more believable and realistic solution to the mystery; Rosemarie, he implies, was doomed from the start, not (as I said in my review) because she dared to rise above her station, but because for all her hard-earned street smarts she didn't understand that in a battle between you and the establishment, the smart money is on the establishment.

In any case, Eichinger stages the story as a vastly entertaining mix of hyper-intense Sirk-ian widescreen glamor and kitchen sink lower depths realism, and his deliciously pouty leading lady is beyond remarkable. Foss, as I also wrote at the time, can register more emotion with her eyebrows than anyone since Barbara Steele, and she seems to particularly enjoy the scene where she flashes a prospective john in a fancy hotel lobby from beneath a leopard skin coat. If this movie had been in English, she'd have been a superstar faster than you could say Sharon Stone.

Here's a minute of the opening -- all that's on YouTube, more's the pity -- to give you an idea of the film's simultaneously flamboyant and elegant visual style. And the similarly watchable Hoss, obviously.

Alas, the excellent Anchor Bay DVD version from a few years ago is out of print at the moment. But you should be able to find a used copy over here without much trouble, and it seems Netflix has it as well. Trust me -- it'll be worth the effort.