How Bad Could It Be? (An Occasional Series): In Praise of Older Women 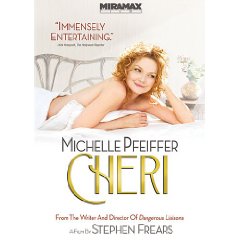 Just finished watching the new Miramax DVD version of Chéri, the adaptation of the scandalous in its day (1920) novel, starring the still toothsome Michelle Pfeiffer and reuniting her with the Dangerous Liasons directing/writing team of Stephen Frears and Christopher Hampton. I missed this one in the theaters earlier this year (as did just about everybody else in the Western World for some reason) but I've had a thing for Pfeiffer since Grease 2, and if the film's older woman/younger man story line is a little too trendy for words at the moment (screw you, Demi Moore! Bite me, Courtney Cox's new sitcom!!!) it has the virtue of being based on the works of the great Colette, who was writing about the whole Cougar thing almost a century before it was cool. Plus Anita Pallenberg, the iconic 60s babe who boinked all five of the original Rolling Stones is in there somewhere, so I figured it might be worth a look.

The place: Belle Époque Paris. Ravishing but past her prime courtesan Léa (Pfeiffer), former muse to the rich and famous, is contemplating her retirement options when archrival Madame Charlotte (Kathy Bates -- interesting casting, that) asks her to teach Fred (Rupert Friend), her spoiled rotten 19-year-old son (nicknamed Chéri), about women. What follows is a six-year affair whose intensity surprises them both (a fact complicated by the fact that the kid is a flamboyant esthete who wears silk pyjamas and Léa's pearls). But they both believe the relationship is casual until the kid is forced into an arranged marriage, at which point they realize (how do you say "duh!" in French?) they're actually in love. The remainder of the film is, as it says on the video box, " an adventure in which a boy who refuses to grow up collides with a woman who realizes she cannot stay young forever." Spoiler alert: This being a French story, it will not come as a complete shock that when Chéri finally figures out Léa was the only woman he could ever truly love, he does the only sensible thing and offs himself.

Okay, cutting to the chase, the answer to our earlier question is "Given the talent involved both on and off the screen, rather disappointingly not so good." On the plus side, the thing looks gorgeous, with several scenes staged like Post-Impressionist paintings come to life, and there's a truly lovely Neo-Classical score by Alexandre Desplat that adds immeasurably to the mood of languid, genteel decadence. Mostly, though, it's the kind of film that seems to consist mainly of unrealistically attractive people sitting around half-clothed exchanging brittle witticisms and eating strawberries, and as beautiful as Pfeiffer looks, she's (putting it kindly) out of her depth in the role; you're painfully conscious that you're watching somebody born and bred in California, if you know what I mean.

Here's the trailer to give you a vague idea of what an attractive misfire the whole thing is, although trust me -- the movie itself is nowhere near as light-hearted and comic.

The Miramax DVD version features a basically state of the art transfer; extras include the de rigeur deleted scenes (negligible) and the even more de rigeur making-of documentary (even more negligible).

In any case, you can (and I wouldn't necessarily ring your doorbell and run if you did) order Cheri over here.