How Bad Could It Be? (An Occasional Series): Short People Got No Reason to Live 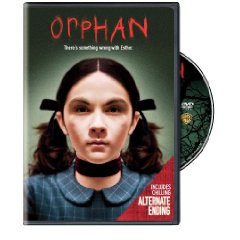 Just finished watching the new Warner Home Video DVD of Orphan, the 2009 Evil Kid That Only the Audience Knows is Evil horror flick starring Vera Farmiga and the charmingly monikered CCH Pounder. I missed this one in the theaters, but the trailer looked interesting (obviously, there had to be some kind of big reveal at the end of the film), Farmiga -- who is not yet a household word but deserves to be -- is one of the most compulsively watchable actresses currently working, and the whole thing was co-produced by Leonard DiCaprio, so I figured it might be worth a look.

The Men Who Stare at Goats -- Funniest black comedy since The Informant!, although my high opinion of the drollery of the latter is perhaps not widely shared. In any case, in this one Kevin Spacey is on LSD, which begs the question -- how can you tell?

Paranormal Activity -- A demon from the nethermost regions of Hell plots to possess the body of a girl with really large breasts. Kudos!

But I digress. And now, the plot of Orphan, slightly re-edited from the blurb on the video box:

Tragedy seems to follow nine-year-old Esther (Isabelle Fuhrman). She was orphaned (duh) in her native Russia and her last adoptive family croaked in a fire she barely escaped. But now the Colemans -- doughy white guy John (Peter Sarsgaard) and alcoholic pianist Kate (Farmiga) -- have adopted her and life is good. Until a classmate takes a serious fall from a slide. Until an orphanage nun (Pounder) is battered to death. And until Kate wonders if that tragic fire really was an accident. At which point we discover that Esther is not exactly what she seems, via a surprise plot development apparent moron Jeff Craig of SIXTY SECOND PREVIEW describes as a "jaw-dropping twist." Spoiler alert: Esther turns out to be short for her age.

Okay, cutting to the chase, the answer to our earlier question is "Ohmigod-really-insulting-to-one's-intelligence-bad." To be fair, director Jaume Collet-Serra, fresh from the triumph that was the 2005 House of Wax remake, has a decent enough eye, and the first half of the picture works up a reasonably suspenseful head of steam in a Bad Seed sort of way. But without giving away the aforementioned "jaw-dropping twist" -- once again, let's just say that Esther turns out to be short for her age -- the whole third act is so overheated and absurd I find it hard to believe audiences didn't walk out in droves. Personally, I was ready to walk out after the opening sub-Cronenberg it's-only-a-dream bloody miscarriage sequence, but perhaps I'm oversensitive.

Here's the trailer to give you a little idea of the film's steroidal ludicrousness.

For what it's worth, Warner's DVD looks and sounds far better than it needs to; in fact, the 5.1 surround track is actually quite creepily effective at home. Modest bonuses include some deleted scenes and "a Chilling Alternate Ending" in which John, Kate and Esther go to the Olive Garden for dinner and everybody lives happily ever after.

Okay, that's not really what happens, but it's no stupider than the actual ending. Have I mentioned that Esther turns out to be short for her age?

In any case, if for some reason you must, you can order Orphan over here.