If It's Tuesday, It Must Be Shameless Filler (Special Storefront Hitchcock Edition) 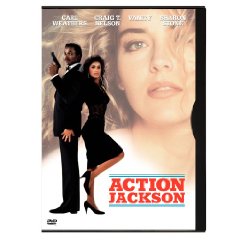 True story: Back in 1989, when I was toiling at the late lamented Video Review magazine, some of my colleagues went on a press junket to LA, the occasion being the home video release (for you younger readers, this would have been on a primitive tape format called VHS) of the film Action Jackson.

AJ starred Carl Weathers, then as now best known as boxer Apollo Creed in the first two Rocky movies, and it was an attempt -- unsuccessful, as it turned out -- to establish a new action (duh) franchise featuring Weathers as a Dirty Harry-esque cop who breaks all the rules blah blah blah.

Anyway, when my colleagues returned, they informed me that Weathers, one on one in an interview, had been charming and gregarious and they'd gotten some good quotes for our coverage, but only one, shall we say, truly newsworthy item had emerged from the conversations. To wit: Weathers announced that he was in development for his lifelong dream project, one that he hoped to be able to get into production after the success of Action Jackson.

Said project: A prequel(!) to Shakespeare's Othello, starring himself as The Moor.

Then as now, words fail me, and yet there's a part of me that still grieves that the film never got made. My suggested working title was The Bitch Deserved It, but again, then as now, I'm totally embarassed by that joke. Still, I'm convinced AJ costar Vanity would have made a totally rad Desdemona

In any case, I bring it up after all these years because I just saw a video clip, involving an even more audacious prequel to a classic, that I absolutely have to share with you (and apologies if this has already gone viral and I'm the last to know).

From the obviously slick and very funny video artistes at NYSU Films, please enjoy the long-awaited backstory for one of the most influential horror films ever made, Alfred Hitchcock's 1963 masterpiece The Birds.

Ladies and gentlemen, behold in breathless wonder -- the trailer for The Eggs.

For more about NYSU Films -- at least if you speak Spanish -- you can you go here. Feel free to putter around; I'm sure they won't mind.

And if you're over your disappointment about the whole Othello prequel thing, you might in fact want to order Action Jackson here. Or not -- what the hell, it's a free country.

[A tip of the It's the Steve Simels Show hat to The Kenosha Kid, who sent me the clip]