Video Event of the Week: Could it be Sony's DVD version of the remake of The Taking of Pelham 123 with Denzel Washington and John Travolta? Would Fox's 20th anniversary Blu-ray of Say Anything, the brilliant Cameron Crowe teen romance starring the young John Cusack, conceivably make the cut? Or, god forbid, against every decent human impulse that separates us from the primordial slime we oozed out of, might Paramount's DVD and Blu-ray of G.I. Joe: The Rise of Cobra by any chance be The One?

All worthy, to be sure, except for that last of course, and I'll have more to say about Say Anything down the line. But for my money, it's got to be the Criterion Collection's ravishing new two-disc edition of Wim Wenders' magisterial Wings of Desire.

The official description, via Criterion:

Wings of Desire is one of cinema's lovelist city symphonies. Bruno Ganz is Damiel, an angel perched atop buildings high over Berlin who can hear the thoughts -- fears, hopes, dreams -- of all the people living below. But when he falls in love with a beautiful trapeze artist, he is willing to give up his immortality and come back to earth to be with her. Made not long before the fall of the Berlin wall, this stunning tapestry of sounds and images, shot in black and white and color by the legendary Henri Alekan, is movie poetry. And it forever made the name Wim Wenders synonymous with film art.

That's pretty accurate, as far as it goes, and yet it doesn't quite get to what's so magical and touching about the film. There's something wonderfully childlike and innocent about it, of course, and it's surprisingly funny -- with Peter Falk (playing himself, sort of), one of the great screen characters ever, how could it not be? And the (mostly) black-and-white cinematography is not just pictorially stunning, it's practically a character in itself; the aforementioned Alekan, who if he'd shot nothing beside Cocteau's Beauty and the Beast would deserve to be one of cinema's immortals, really surpassed himself here. Wenders also conjures up an amazingly palpable sense of place; he conceived the film in part as a study of a city he loved and yet (after years in the US) felt somewhat alienated from, and the evocation of Berlin as a sort of island outside of time is particularly vivid.

Here's a clip (nowhere near as good looking as it is in Criterion's transfer, alas) to give you just a taste.

Criterion's new transfer (I saw the DVD -- I assume the Blu-ray is incrementally better) is just about flawless. I had an Image laserdisc of Wings in the late 80s that I used to use as a system demo to impress folks with in my proto-home theater; let's just say that compared to this, the old version looks like a scratchy third generation dupe of an 8mm home movie. The original stereo soundtrack has also been cleaned up and remixed to 5.1 surround, and it's great.

The bonuses, as is customary with Criterion sets, will keep you busy for a while. Disc one (the film itself) has a running audio commentary by Wenders and Falk and a couple of trailers. Disc two has a new making-of documentary (featuring Wenders, co-writer Peter Handke, and a few other worthies), plus excerpts from two documentaries on Alekan (who is very French and very charming) plus a bunch of deleted scenes and outtakes. The making-of doc (from 2003) covers a lot of the same ground as the audio commentary (from the late 90s), but to the credit of all concerned, nobody in either suggests that the folks behind the awful 1998 American remake City of Angels, with Nicolas Cage in the Bruno Ganz part, be taken out and shot. Myself, I wouldn't have been quite so magnanimous.

In any case, you can -- and obviously should, immediately -- order Wings of Desire over here. 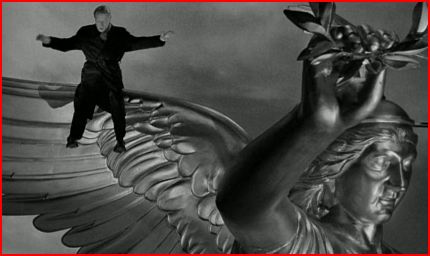 Most Memorable Film Featuring the Meddling of Some Supernatural Entity in Human Affairs, Great or Small!!!

That's Gabriel as in the archangel of the same name. In the film, he takes over the body of the U.S. President (Walter Huston) and institutes a wingnut millenium; you have to see it to believe it, actually.

More fallen angels, this time played by Matt Damon and Ben Affleck. Alannis Morrisette, as God(!), is in there as well, which for me is worth the price of admission.

Ralph Richardson as an even funnier Supreme Being than Alannis. Why does he allow evil to exist? "I think it's something about free will."

Spooks run wild, and the kind of note perfect mix of comedy and horror they really don't make anymore.

And the Numero Uno film about intervention from beyond, without a doubt, just happens to be...

Hands down, the most magnificently nutty horror flick of the last couple of decades. What's it about? Well, as I said in these pages back in February, technically it's about some kind of epic post-Miltonian battle between angels pissed off at God for some reason (Viggo Mortensen has a cameo as Satan), but mostly it's about Christopher Walken, in an amusing rug and a rock star coat, bitching about "talking monkeys" and posing like Snoopy doing his vulture impression. I should also add that it spawned four -- count 'em, four -- sequels (Walken, picking up a fat check one hopes, is in two of them) and that its high point comes when Walken raises Amanda Plummer from the dead because he needs her to drive his car.