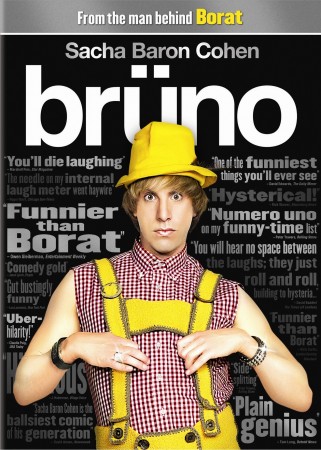 Video Event of the Week: Could Sony's Blu-ray of The Ugly Truth, the romantic comedy starring Gerard Butler and Katharine Heigl (playing a a lonely, neurotic career woman for the third time in as many years) possibly get the nod? Might Kino International's DVD of Ballast, the acclaimed indie about a small town in the Mississippi Delta rocked by a suicide, conceivably make the cut? Or against all the odds and, frankly, every single thing that separates human beings from the beasts of the jungle, might Warner Home Video's Blu-ray of Watchmen: The Ultimate Cut (clocking in at a mere 215 minutes) in any way shape or form be The One?

All worthy, to be sure, except for that last of course, and I'm really beginning to worry about Kathrine Heigl (hey -- she produced that flick herself, so the typecasting really is a little odd). But for my money, it's got to be Brüno, Universal's new DVD of Borat auteur Sacha Baron Cohen's latest full-frontal assault on good taste.

Reviewing this back in July, I opined that it was "not as minty fresh as Borat and at times the line between making fun of homophobia and actual homophobia gets a little blurry." I also ventured that it was nonetheless mostly paralytically hilarious, and concluded with the observation that "any movie that demonstrates that Ron Paul is a clueless bigoted twit is by definition a good one."

I'll stand by those assessments as far as they go, but having now watched the thing on disc I have to say I'm less clear than ever exactly who the joke is supposed to be on, at least some of the time. By the same token, I'm even more impressed with Baron Cohen's willingness to push a gag to the breaking point and leagues past it -- without giving anything away, there's a scene involving a simulated sex act that goes on for so long that, in Christina Applegate's famous phrase, the mind wobbles. Let's just say that I can't think of any other comic auteur currently working who would have had the stones, if that's the word, to stage it.

Universal's disc version has all sorts of interesting bonus features, by the way, including a gaggle of deleted, alternate and extended scenes. Here's a particularly droll one in which Baron Cohen's Brüno, the gay Austrian TV fashionista seeking wider fame in America, encounters a certain disgraced baseball great.

There's also a running commentary track featuring Baron Cohen and director Larry Charles; much of it is fascinating, but on some level it's like watching a magician explain how his tricks are done, and I for one could have done without (although the bit about putting the ümlaut on the Universal logo is a hoot).

In any case, you can -- and on balance probably should -- pre-order Brüno
over here. 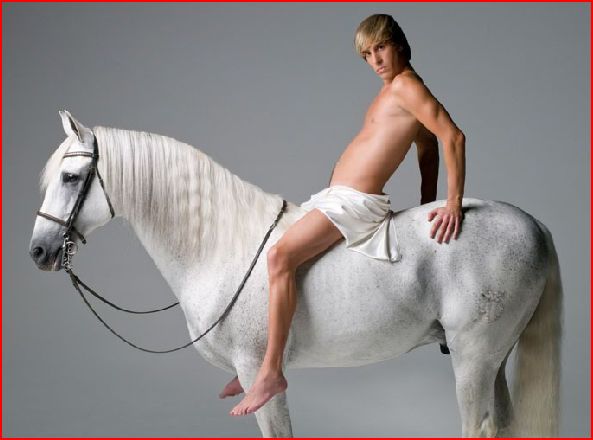 Best or Worst Film Whose Title is Somebody's First or Last Name!!!

You know, I'm sure I saw this one at some point, but I have absolutely no memory of it whatsoever. By the same token, I know I heard a Milli Vanilli record in 1990 as well, and I couldn't hum it to you if there was a gun to my head.

Oh, this one. He fights the Russian, right? And it's got that really built blonde, if memory serves.

"Eye of the Tiger" -- good times, people! Incidentally, here's how the song was really supposed to sound.

Perhaps the conceptual masterstroke of the series, by which I mean it isn't actually a sequel -- it's a remake! A genius move, frankly; the crafty Stallone probably saved a fortune by recycling the script of the original.

And the numero uno most memorable flick featuring a single name in the title is, as if there was any suspense at all at this point, obviously --

Okay, all kidding aside, this is a really wonderful film; as I've said here before, if it had come out thirty years later, we'd be talking about it as the greatest indie of all time. Basically it's a sweetly romantic fairytale disguised as a gritty piece of urban realism; Stallone's truly inspired sleight of hand here is to distract you from noticing what the film actually is up to until the very last possible moment.