Weekend Cinema Listomania (Special In the Not Too Distant Future Edition) 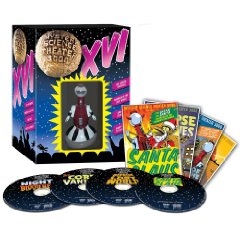 Video Event of the Week: Could VCI Entertainment's DVD of Douglas Sirk's low budget Chekhov adaptation Summer Storm (1944), starring George Sanders, get the nod? Might Microcinema's disc of Luis Bunuel's 1956 Death in the Garden, an overlooked thriller from his Mexican period, conceivably deserve the honor? Or despite the horror that was the recent cable remake, could A&E Home Video's remastered box set of the complete original The Prisoner tv series, with the great Patrick McGoohan, possibly be The One?

All worthy, to be sure, and if I can shnorr a copy of the Sirk, I'm going to have something to say about it down the line, but for my money it's got to be Shout! Factory's four-disc limited edition box set Mystery Science Theater 3000: Volume XVI.

You know the set-up, of course: A guy -- either Joel Hodgson or Michael J. Nelson -- is trapped on a spaceship with a couple of robots (Crow, Tom Servo and the preternaturally wise Gypsy) and forced by mad scientists to watch really bad movies, which he and they survive by cracking wise at them. It's a brilliant concept in its since often-imitated post-modern way, and over the course of the show's ten year run, it resulted in some of the funniest stuff ever seen on the small screen.

The films being parodied in the new set? The Bela Lugosi cheapie The Corpse Vanishes (a Joel episode from the first cable season, and as interesting as you'd imagine -- kind of like baby pictures), the Mexican jawdropper Santa Claus, early Roger Corman-derived turkey Night of the Blood Beast (in both its Thanksgiving Special version and straight, if that's the right word) and of course, the always amazing sub-Mad Max futuristic motorcycle saga Warrior of the Lost World, the first episode from the first complete Mike season. I'm hard pressed to say which is the most hilarious, but let's stipulate up front that after you've seen what the Satellite of Love crew does to Santa Claus, your ideas about god, man and the nature of reality will never be the same.

Here's a clip from the set -- the opening of WOTLD -- just to whet your apetite, as it were.

"It's not so much the apocalypse...it's the humidity." God, I'd forgotten how much I love these guys.

The films aside, the set comes with a plethora of fun bonuses, beginning with a nice little plastic figurine of Tom Servo and including various theatrical trailers and a hilarious documentary on Mexican horror and sci-films, Santa Claus Conquers the Devil: A 50 Year Retrospective. Best of the bunch by far, however, is a new interview with WOTLW director David Worth, who tells a bunch of great stories about the genesis of the film and who turns out to be a thoroughly charming and self-effacing guy. Yes, it's a bad film, he cheerfully admits, but then again so are most of Renny Harlin's, and his crap costs a hundred times more. Truer words, etc.

In any case, you can -- and most obviously should -- pre-order MST3K: Volume XVI
over here.

The Awful But Somehow Respectable Film You Really, Really Wish Had Been Given the MST3K Treatment!!!

Hands down the most unintentionally hilarious art film of its decade; you would need a heart of stone not to laugh when fisherman Max Von Sydow won't boink his wife because he's depressed about the Red Chinese getting The Bomb. And the seemingly endless uninterrupted close-up of Ingrid Thulin talking about her psoriasis all but begs for mockery by two robots and a guy in space.

Stallone. Competitive arm-wrestling. And as you can see, it would only be better in German.

A period gangster movie with children playing all the parts, and easily as thrilling as that sounds. Plus: Songs by demented death dwarf Paul Williams. If ever a movie called for three silhouettes in front of it, this is it.

A New York Jew's idea of high WASP angst, and about as convincing as David Brooks pretending to be Episcopalian, if you'll forgive a recycled joke. C'mon -- wouldn't you love to see this one played for laughs, finally?

Six million had to die so this schmuck can tell his kid la vita è bella? F**k him and il cavallo he road in on. Seriously -- I've wanted to throw the metaphorical equivalent of several custard pies at this piece of crap for years, but I'd happily settle for Mike, Crow and Tom standing in for me in the theater.