What's UP Doc: The Search For a Cleverer Headline 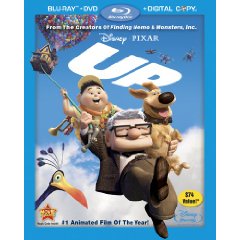 As a very wise man once said -- if memory serves, it was my old chum Glenn Kenny over at Some Came Running -- one's reaction to a new animated film from Pixar tends to be "ho hum, another masterpiece." Case in point: Disney's just released DVD and Blu-ray combo of the most recent Pixar feature, the hilarious and visually stunning UP. Which is to say that while its not as transcendently great as, say, WALL-E, it's so good on so many levels you almost take its brilliance for granted. You know what I mean -- just another day at the office for Pixar, right?

For those of you making your Christmas lists, I should add that Disney's new video package features the film on Blu-ray and DVD, plus a third platter of bonus features and a digital copy disc. I saw the DVD, which looks astounding; if my colleague Joe Galm, who reviewed the Blu-ray in these pages is right (and I'm sure he is) it plays even more remarkably in the newer format. I should add, however, that neither DVD or Blu-ray features the theatrically released 3D version, which was one of the most impressive things of its kind I've ever witnessed; one presumes that will be available for home consumption sometime down the line.

Anyway, here's a clip from Dug's Special Mission, the new animated short featuring the titular talking canine, and my favorite of the bonus features. Squirrel!!!!!

For the record, other bonuses include an informative if not scintillating running audio commentary by by director Pete Docter and co-director Bob Peterson, some de rigeur deleted scenes, and (on the Blu-ray) an in-depth look at the making of Lost and Star Trek composer Michael Giacchino's memorable orchestral score (for what it's worth, BTW, I think Giacchino's the most interesting guy in his field at the moment).

I should also add that star Ed Asner's voice work as the film's geriatric balloon salesman is priceless; clearly, this is the Grumpy Old Man role he was born to play, even if you never actually see him. Seriously -- if you're not being upstaged by cute Pixar animals like Dug, you must be doing something right.

The bottom line, of course, is that you can -- and frankly, with the holidays coming, er, up, you'd be some kind of a schween if you didn't -- order UP here.