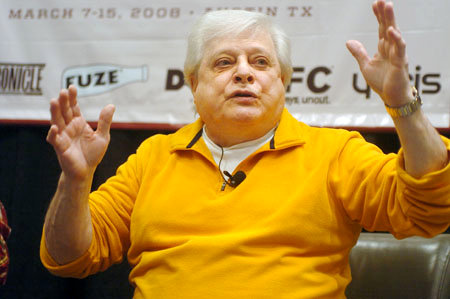 Though some names have been attached to write the script for the follow up to 2009 movie Star Trek, Harlan Ellison does not hesitate to offer himself as the scribe for this upcoming movie project. The acclaimed sci-fi writer who once wrote "The City on the Edge of Forever" episode of [the original] TV series has taken it to his blog to express his willingness to work with director and producer J.J. Abrams for the sequel. "I would likely try to steer him toward the original film idea I was asked to pitch, by the late Gene Roddenberry and a production exec whose name I have blissfully flensed from memory...," the Hugo Award-winner wrote. "If the very smart Abrams didn't want to go that way, I would be wide-open to rethinking such a film from the git-go."

...Though the Trek sequel will not happen soon, Roberto Orci, Alex Kurtzman, and Damon Lindelof [who wrote the 2009 hit] have been tapped by the studio to pen the script. Abrams previously sparked a rumor that this new film could be made in 3-D, but he is still not sure whether or not he will return as director.

What's particularly interesting about this, of course, is that Ellison finally settled the suit against Paramount he'd brought earlier this year. Said suit, of course, stemmed from royalties allegedly due to him over that self-same "City on the Edge of Forever" script from 1967. Even more interesting, and perhaps a sign of the times, is that Ellison lets it drop over at his blog that he doesn't even have an agent any more.

Actually, I hope Ellison gets the gig; he's a great writer, and it would be nice to see a Trek movie, finally, that's not just another shoot-em-up space opera, one that deals with some actual sci-fi concepts for a change. In any case, lord knows he understands the show and the characters.

I should add that in 2008 Ellison was the subject of Dreams With Sharp Teeth...

... a really terrific documentary on his life and work, and you can -- and should -- order a DVD of it here.

I should also add, as I've mentioned on a few previous occasions, that as far as I know everybody in the world has an amusing Harlan Ellison story and as it turns out, so do I. I will say again then, and for the record, that Harlan almost got me canned from a really cool job back in the day and that an 80s video release of another classic TV show he wrote ("Demon With a Glass Hand," from The Outer Limits) had something to do with it. Ask me really nice about it or buy me a beer and someday I may tell it to you.