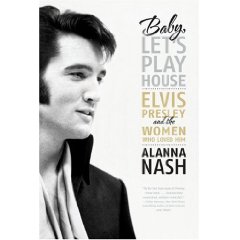 So yesterday morning, I was once again immersed (as is often my wont) in the great comforting warm bath that is the New York Times Arts and Leisure section when I chanced across a review of Baby, Let's Play House: Elvis Presley and the Women Who Loved Him, a new book about precisely that.

The piece was written by Janet Maslin, the Times rock crit turned film crit turned book reviewer, and as some of you may recall, I haven't forgiven her for
walking out on George A. Romero's Dawn of the Dead back in 1979, so I can't say this was exactly a selling point for the book. In any case, I'm actually kind of a lapsed Elvis fan these days; for whatever reason, I've reached the moment where the freakshow of the King's later years strikes me as so tragic and sad that I can't really enjoy the art (and I think art is what it was) as easily I used to. (And when I say art, I include some of Presley's films, or at least parts of them). 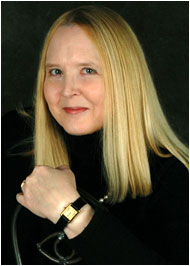 On the other hand, it turns out Baby, Let's Play House is by my long-time Stereo Review colleague Alanna Nash, a terrific writer who's done yeoman Presley scholarship in the past, so I'd be remiss if I didn't suggest you check it out. I haven't read BLPH yet myself, obviously, but I'm going to as soon as I shnorr a copy; if Maslin is to be believed [see above -- have I mentioned she walked out of Dawn of the Dead before reviewing it?] there's a lot of interesting new stuff in the tome, as difficult as it may be to imagine that anybody could have anything remotely unexpected to say about Presley at this point.

Along those lines, the following excerpt from Maslin's review in particular piqued my curiosity:

Nash has done her own dogged research too, and some of it is memorably succinct and tough. Consider this near haiku from Patti Parry, the lone female buddy in Elvis's inner circle: "Nineteen-year-old truck driver becomes superstar and super stud, which he wasn't." Or this from Lamar Fike, one of his closest associates: "I'll give you Elvis's relationship with Priscilla in a nutshell. You create a statue. And then you get tired of looking at it." Or from Sheila Ryan Caan, one of the rare girlfriends who felt free to tease Elvis about his sartorial style: "Does Cruella know you have her cape tonight?"

...And after presenting an endless-seeming parade of consorts (he [Elvis] had declined from young starlets to young bank tellers in his final months), Ms. Nash gets the last word on girl-chasing from Elvis at his weariest.

"Why the hell do you put up with her?" Billy Smith, Presley's cousin and entourage member, tells Ms. Nash that he asked Elvis about Ginger Alden, the consort who was asleep in the next room when he died.

Said the King, "I'm just getting too old and tired to train another one."

In any case, you pre-order Alanna's book (the pub date is January 5th) over here. There's apparently a Kindle version available there as well, but frankly that's a technology that frightens me even more than Twitter.

Tags: Baby, Let's Play House: Elvis Presley and the Women Who Loved Him, George A. Romero, Dawn of the Dead, Alanna Nash
Print