God and Man at Philco 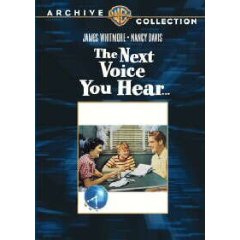 Oh my goodness, but this has just made my year -- the fine folks at Warner Archive have finally seen fit to release a DVD version of one of the top ten wackiest major American studio flicks ever. I refer, of course, to the 1950 makes-you-go-huh? classic The Next Voice You Hear. Starring James Whitmore, and directed by William "Wild Bill" Wellman. In which the Supreme Being, the All-Powerful Creator of the Universe, delivers his revered wisdom to a waiting world via...well, let's just say that a certain classic Buggles hit from the early MTV era would have an eerie relevance.

The plot, as summarized over at IMDB:

Joe Smith, American, lives in a Los Angeles suburb and works at an aircraft plant. One night Joe hears a voice cut in on a radio program: "This is God. I'll be with you for the next few days." It turns out, everyone in the world listening to any radio heard the same thing. More messages come; some people react positively, others negatively.

Well. That has a certain enigmatic poetry, I think, and it is in fact vaguely reminiscent of my favorite synopsis of all time, for a Star Trek episode in a 70s edition of TVGuide : "On a distant planet, Kirk and Spock find aliens in strange positions."

Nevertheless, it really doesn't come close to nailing he film's surpassing oddness, beginning with the fact that, the title notwithstanding, you never actually hear God's voice; all the messages from the Great Beyond are delivered off screen. Why this is the case I can't say, but given that a lot of the film's characters are convinced that the Big G's dispatches are some kind of prank being perpetrated by Orson Welles, it's possible that it was a cost-cutting move to avoid having to hire the great actor/director (according to Time, the film was made "on a low-budget, short-shooting schedule that almost passes for a miracle itself.")

The last time I saw this was back in '93, when I reviewed a long out of print VHS copy from MGM/UA. I seem to recall that I mostly fixated on the fact that former First Lady Nancy Reagan plays Mrs. Joe Smith, American, and I must admit that seeing her all frumped up as a blue collar housefrau is still a hoot, especially when you try to reconcile the overall piety of her character and her portrayal with a certain anecdote about her told in Peter Lawford's autobiography. But perhaps I've already said too much.

In any case, here's the trailer, which only hints at the film's early Cold War mixture of solemnity and mishegass. (Yes, like a lot of other weirdo fantasy films of the early 50s, The Next Voice You Hear is in part an anti-Communist parable. See also: Red Planet Mars).

In any case, Warner Archive's transfer is razor sharp (a lot better than that YouTube clip, actually) and you can -- and absolutely should -- order it directly from their store right here.