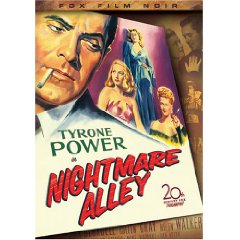 Okay, it's not exactly one of those The Clown Who Wants to Play Hamlet deals, but in 1947, Tyrone Power -- as ridiculously good looking a leading man as the studio system ever coughed up, and then at the height of his success -- decided he wanted to do something dark, edgy and unexpected (by his audience). The result was one of the strangest films of its day, one almost as big an anomaly for a glamour factory like 20th Century Fox as Tod Browning's Freaks had been at MGM fifteen years earlier.

The Road -- Just what the world needs: A George A. Romero zombie movie without zombies. Seriously, why didn't they just remake the original Pride and Prejudice and be done with it?

The Lovely Bones -- Just what the world needs: A remake of What Dreams May Come without Robin Williams's chest hair. Seriously, if they were going to do it, why not throw in some zombies? I mean, besides Stanley Tucci.

But we were talking of Nightmare Alley.

Sleazeball hustler Stanton Carlisle (Power) joins a seedy traveling carnival, and immediately sets his eye on Mademoiselle Zeena (Joan Blondell) and her alcoholic husband, Pete (Ian Keith), a formerly top-billed psychic act on the skids. Stanton tries to learn the secret code Zeena and Pete used in their act, but she won't divulge it; he tries to seduce her into teaching it to him, but she remains faithful. Finally, one night in Texas, Stanton accidentally(?) gives Pete a bottle of wood alcohol instead of moonshine. With hubby dead, Zeena is forced to train Stanton as her stooge; he, meanwhile, has been romancing the troupe's younger trollop Molly (Coleen Gray), and they're forced into a shotgun marriage. He and Molly leave the show, taking the psychic act with them, and as The Great Stanton (and assistant), they find tremendous success in expensive nightclubs. Later, with the help of crooked Chicago psychologist Lilith Ritter (Helen Walker) Stanton passes himself off as someone who can actually communicate with the dead, but in the end a complicated swindle comes crashing down when Molly has moral qualms. Eventually, Stanton sinks into alcoholism, and the only job he can get is at another carnival -- biting the heads off live chickens in a sideshow.

Here's a clip to give you an idea of the film's remarkable noir seediness and almost complete lack of sympathetic characters.

In any case, if not necessarily a great film, it's an instantly memorable one, but what may be the most remarkable thing about it -- apart from the fact that it didn't destroy Power's career, probably because he makes you feel for Stanton despite everything -- is this credit. 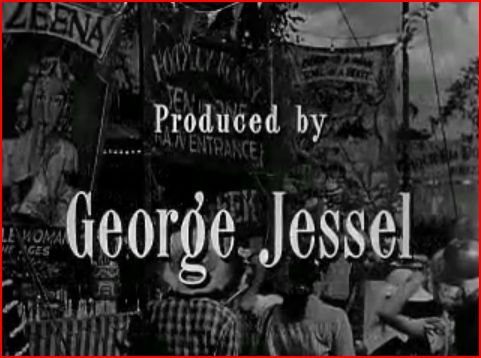 That's George Jessel, a/k/a Georgie, of course, and he's these days remembered -- if at all -- as the subject of one of Billy Crystal's funnier celeb impressions. As recently as the late 60s, however, he was an all but ubiquitous presence known as "America's Toastmaster General"; how such an avatar of straight-laced quasi-inspirational old-fashioned showbiz hokum came to be associated with a project like Nightmare Alley is a mystery that may perhaps never be solved.

For you younger folks, here's Jessel is on TV's What's My Line. I'm actually a bit surprised, however, to find that that no record of his signature vaudeville era comedy act -- in which he enacted one end of a phone conversation with his stereotypical Jewish mother -- appears to be on YouTube at the moment. God knows, he did it on the Ed Sullivan Show often enough.

In any case, you can -- and definitely should -- order Nightmare Alley here.